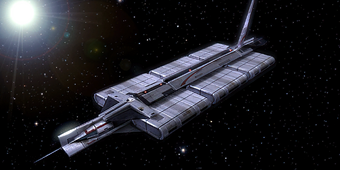 Garrus told you about his encounter with Dr. Saleon, the geneticist. He regrets letting him escape the first time and hopes that you'll be able to track him down and bring him to justice.

When Shepard repeatedly talks to Garrus while aboard the Normandy, asking about his history in C-Sec, Garrus eventually tells a story about Dr. Saleon. Shepard will then get the assignment to track him down, along with the coordinates of Dr. Saleon's ship, the MSV Fedele located in the Herschel system of the Kepler Verge.

This is a fairly short assignment with only one group of organic enemies who like to engage in close range. Sledgehammer Rounds and anything else that can knock them back and keep them from swarming you will be useful.

Squad-wise, Garrus, of course, asks specifically to come along, but it is up to you whether to bring him. 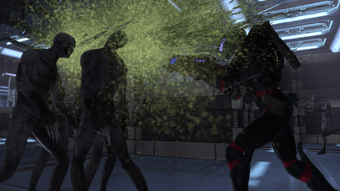 Upon entering the MSV Fedele, the entry room is empty, so head into the main hold. Inside the main hold you will encounter Saleon's Test Subjects, which are more or less Thorian Creepers. However, even if you have completed Feros, they aren't vulnerable to the Anti-Thorian Gas grenades, so you will have to take them out the old fashioned way, with gunfire and physics-based attacks.

There are also a few containment canisters in the main hold whose explosive bangs can help to keep Subjects at a distance – tech abilities like Overload and Sabotage, which don't do much when aimed directly at the subjects, can be brought into play here to create larger explosions.

To stay alive, since the Subjects have the same attacks as the Creepers, keep on the move and don't let them get too close. If they do get too close they will either use their spitting attack, which results in toxic damage, or they will melee attack you. Both modes of attack cause a lot of damage, so again keep your distance and use powers and shotguns to keep them off their feet. Once all the Test Subjects are down, head towards the cockpit section of the freighter, there are no crates in the main hold. When you reach the cockpit section, the door on the left is locked, the cockpit contains nothing, and the one on the right is where Saleon is. Open the door to continue.

When talking to Dr. Saleon (or Dr. Heart, as he now calls himself), he will first thank you for rescuing him, but then Garrus will confirm his identity. Saleon will deny it, and you can ask for confirmation. Garrus makes some comments, and Saleon asks Shepard to keep Garrus away from him. You can now choose to either tell Garrus to back down, or to finish the Doctor.

Saleon will turn hostile either way. Killing him requires just one shot, usually before he can even shoot back. The ending conversation depends on your choices above. 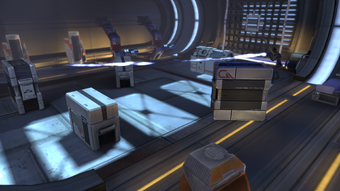 If Garrus is not in the party, Dr. Saleon will try to smooth talk Shepard, but a squad member will tell him that the Commander is aware of his doings, causing him to turn hostile and flee, ultimately dying from a single shot. On the PS3 version however, sometimes there will be no dialogue with Dr. Saleon trying to persuade Commander Shepard, and battle will commence immediately upon entering through the door.

After Saleon is dead, you get the following text about his experiments:

“Saleon’s medical equipment is stained with the blood of many species. Pale blue, violet, orange… and more than a few dark red. But his work has ended here. Time to head back to the Normandy.”

Retrieved from "https://masseffect.fandom.com/wiki/Garrus:_Find_Dr._Saleon?oldid=513754"
Community content is available under CC-BY-SA unless otherwise noted.