The genophage was a biological weapon deployed against the krogan by the turians during the Krogan Rebellions. It was designed to severely reduce krogan numbers by "infecting" the species with a genetic mutation. 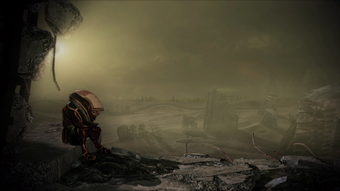 The genophage's modus operandi is not to reduce the fertility of krogan females, but rather the probability of viable pregnancies: many krogan die in stillbirth, with most fetuses never even reaching this stage as their nervous systems have been prevented from developing. Moreover, every cell in each krogan is infected, to prevent the use of gene therapy to counteract it. The genophage alters hormone levels in krogan, and one could theoretically repair its damage by inducing affected glands to compensate in production.

Though the genophage was not designed as a "sterility plague", the combination of a low frequency of viable pregnancies with the krogan proclivity to violence and indifference about focused breeding leaves the krogan a dying race, and soon to be extinct.

The genophage was originally developed by the salarians. They believed that, as the consequences would be so devastating, no one would ever deploy the genophage, thus wielding it as a deterrent. However, the salarians and the turians had different military attitudes, the turians only appreciating an approach of "massive retaliation". Once the genophage was complete, the turians immediately used it, and krogan numbers began to dwindle rapidly. Any female krogan who could carry young to term became a prize of war who was viciously fought over. Taking advantage of this, a female warlord named Shiagur used her fertility as a bargaining chip to attract the strongest males to her army. 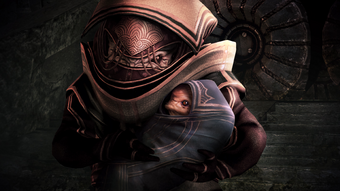 After several hundred years of living with the genophage, the knowledge their species will soon be extinct has created a kind of fatalism amongst the krogan that makes them dangerous opponents—they are indifferent to who they attack or kill, or what risks they take, as their species is doomed. The psychological impact was particularly devastating, as the krogan had to endure disposal of massive piles of dead children. A few individuals, such as Urdnot Wrex, have attempted to rebuild the species, or at least curtail its decline, by focusing on breeding, but the inherent belligerence of the krogan usually frustrates their efforts.

There is no known cure for the genophage. Some krogan groups have invested in companies such as Binary Helix to try to discover one; however, efforts have so far been thwarted by a lack of krogan scientists and a disinterest of other species in a revived krogan population. This has led to some krogan trying bizarre alternatives: as Garrus Vakarian informs an incredulous Commander Shepard, there is a healthy trade in krogan testicles on the black market, because of the unsubstantiated belief that testicle transplants can counteract the effects of the genophage. 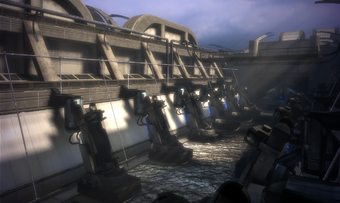 Possibly with the assistance of Binary Helix or even Sovereign, Saren Arterius develops a genophage cure and uses it to breed a krogan army on Virmire. Shepard and Captain Kirrahe's determination to destroy Saren's base, and thus the cure with it, can cause a rift between the Commander and Wrex if he was recruited to the team.

The exact nature of the cure is never discovered and it is lost when Shepard and Kirrahe nuke the facility.

Saren's base on Virmire is referred to as a cloning facility several times. How Cerberus learned this is unknown, but it would explain the reproduction of krogan without "curing" them.

Commander Shepard can speak to Mordin Solus about the genophage. According to Mordin, the krogan were beginning to evolve a resistance to the genophage, allowing the rate of viable pregnancies to increase significantly. Mordin explains that he and his colleagues worked on a new genophage variant: in order to keep the krogan population from rising, population growth was adjusted to pre-industrial levels.

During Mordin's loyalty mission, Shepard helps him find his former student Maelon, who had been kidnapped by krogan Blood Pack mercenaries on Tuchanka. When they arrive at the base where he is kept, it is discovered that the Blood Pack is using Maelon to develop a cure for the genophage in order to strengthen their group. Several dead test subjects are found, including several humans (for their genetic diversity) and a female krogan. This horrific sight causes Mordin to reveal to Shepard that even though he felt the genophage was necessary, he felt guilty about his work on it.

Eventually, Shepard and Mordin find Maelon, who reveals that he was working on a cure on his own free will and feels no guilt for the people he killed in order to find it. After dealing with Maelon, Shepard has a choice to destroy Maelon's data, or to keep it.

It is revealed that some krogan females managed to survive Maelon's experiments. STG led a mission to capture the females and brought them to Sur'Kesh. If Mordin survived the Suicide Mission, he would leak the existence of the females to the Urdnot clan leader, provoking the proper political pressure to force the salarian dalatrass to release them. However, only one female, nicknamed Eve, survived, and Cerberus is looking to preserve the genophage to prevent an alliance between turians and krogan. 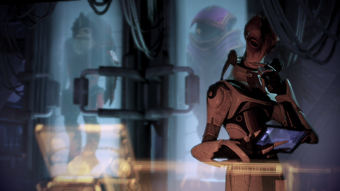 If Maelon's research was preserved, it would be adequate to complete a cure, which would be released on Tuchanka through the Shroud facility. Dalatrass Linron, fearing that the krogan would expand again if the genophage is cured and the Reapers defeated, as well as seek revenge on the salarians and turians for unleashing it in the first place, then reveals to Shepard that the salarian STG team had previously sabotaged the Shroud to prevent cure dispersal and offers the salarians' support if the Commander hides the sabotage. Mordin later overrides the sabotage and sacrifices himself in order to release the genophage cure to all krogan, therefore ending the genophage for good and allowing the krogan to join Shepard's alliance to save Earth from the Reapers.

It is also possible for Shepard to convince Mordin to not release the genophage cure. Mordin will then pretend that he was killed while administrating the cure, and will go to the Crucible to help in its construction.

If Mordin didn't survive the Suicide Mission, his role in curing the genophage will be fulfilled by Padok Wiks.

If Shepard chooses to use the Crucible for the synthesis of organic and synthetic life, the genophage is cured regardless of whether Mordin or Padok released a cure on Tuchanka. 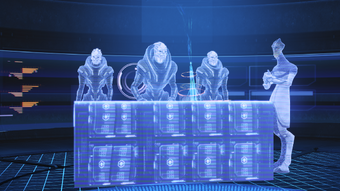 In the Citadel Archives, a document dated 710 CE detailing the deployment of the genophage shows three turians with a salarian moments before activating the Shroud. The turian at the terminal states that releasing the genophage was authorized only for the sole salarian to argue that his own government did not authorize its release. The turian orders for one of his two sergeants to restrain the salarian, only to order the other sergeant to restrain both the salarian and the first sergeant when he questions their orders, stating that it was genocide. The lead turian remarks that the salarians would be thanking the turians one day before he releases the genophage seconds later.

When the Andromeda Initiative departed the Milky Way in 2185, its krogan colonists were still afflicted by the genophage. Before departure, however, the krogan discovered they had developed a genetic mutation that naturally resisted the genophage's effects. While the krogan colonists were in cryosleep during the 600-year journey to Andromeda, they also underwent gene therapy to bolster the mutation. By the time they awoke, the survival rate of their offspring had been improved from 0.1% to 4%. Nakmor Kesh said this gave her people a chance to have a future in Andromeda.