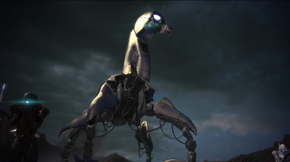 The Geth Armature is a mobile anti-vehicle and anti-personnel unit employed in high-risk areas, often dropped directly from a Geth Dropship. The unit consists of a quadruped "tank" or "walker" and is usually accompanied by Geth Rocket Troopers. Armed with superior firepower and a Siege Pulse assault cannon, this geth is easily a match for the armored vehicles of other races. Its main armament is deadly but slow to recharge, but the Geth Armature compensates by knocking down infantry with a smaller secondary weapon, which, while not as powerful as the Mako's, fires more rapidly, making it very dangerous to engage an Armature at close range.

Armatures are sentient, synthetic lifeforms capable of independent thought, learning and action. When inactive, Armatures fold into a compact state, allowing them to be packed into containers, or place themselves in small spaces. This feature, combined with their armaments, makes Armatures perfect for garrison forces or for ambushes.

The Geth Colossus is similar to the Armature, but is both larger and more heavily armed.

In the game, Armatures are typically encountered in areas where the Mako is expected to be driven. The Siege Pulse can kill foot-mobile infantry in one shot, so duck when the Armature is readying for the shot (it takes several seconds for the weapon to recharge.) The Siege Pulse also depletes the Mako's shields quite fast but the blast can be avoided through the use of the Mako's propulsion jets.

A good tactic is to ram the Armature, which will knock it down briefly and allow the Mako to attack with its cannon while the Armature is struggling to stand up. If the Armature's shields are down, a few consecutive shots from the Mako's cannon should be enough to destroy it, even when the Armature is at full health. If the Armature has smaller geth troops around it, it's generally a good idea to destroy the foot-mobile infantry first and then concentrate on the stronger Geth Armature afterward. 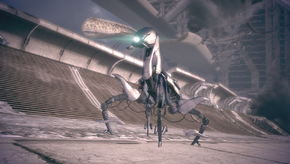 On foot, the best tactic is to Lift the Armature—which will leave it helpless and disable it for several seconds when it lands—then hit it with tech skills like Sabotage and Overload. Only Master Throw is capable of knocking down an Armature. Shooting the Armature with Tungsten Ammunition, especially combined with Assassination, will cause huge damage very quickly.

If you prefer using a sniper rifle against Armatures, find high ground in a position where you're safe from its Siege Pulse before using Assassination. AI Hacking is also effective especially if other geth are around, but it has to be high level to work on Armatures. If the Armature is very close, use Barrier or ensure your shields stay charged, make sure the other team members take cover, and keep moving to avoid the Siege Pulse or one blast can wipe out your entire team.

Additionally, you can combine the two tactics. Ram the Armature and park the Mako on top of the stunned geth, preventing it from recovering. Exit the Mako and kill it with small arms fire. Killing it while on foot will also yield a higher experience reward. Check your target, as the Mako is vulnerable to friendly fire.

If for some reason during the struggle you should find yourself overwhelmed, or if there are two Armatures, use Stasis. Stasis will get the Armature out of the fight and give you time to plan, or if there are two Armatures, putting one in Stasis allows you to concentrate firepower on the other. It is also possible to kill an Armature by using the environment; ramming it into lava or over the edge of the Prothean Skyway will kill it instantly. 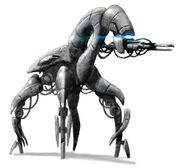 Retrieved from "https://masseffect.fandom.com/wiki/Geth_Armature?oldid=135168"
Community content is available under CC-BY-SA unless otherwise noted.