Few details are known about the manufacture of geth equipment, though their weapons and armor are of the highest quality. The Geth Armory produces Rage, Berserker and Battlemaster armors.

A license to sell Geth Armory products is available from Morlan, a salarian merchant located in the Lower Markets of the Citadel Wards.

Only the Geth Pulse Rifle can be obtained in-game -- geth shotguns and sniper rifles are available by using console commands. The geth sniper rifle (gained with the 'gethgun_sniper' cheat code) is the only geth weapon with upgrade slots. Levels I-IX have one weapon upgrade slot, and level X has two. There is no ammo upgrade slot. All geth weapons share the pulse rifle name, model and sound effects.

The Geth shotguns can only be acquired through console commands.

The Geth sniper rifles can only be acquired through console commands. 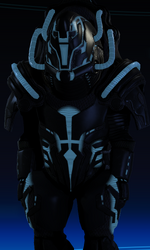 The Geth Pulse Rifle is a compact highly-accurate, high-powered, advanced energy pulse assault weapon manufactured by the Geth Armory, which when discharged manifests itself briefly as a sharp, cyan beam ending in an electrical discharge. It is the standard infantry weapon for the geth military, and is standard-issue to many of their troops, including Juggernauts, Shock Troopers, and many other geth units. The weapon shares the appearance of the geth with glowing parts, smooth rounded edges, and a shiny, chrome finish.

Some Pulse Rifle units are occasionally known to be found outside of geth space, sold by merchants such as the Alliance Requisition Officer. These weapons are not modifiable, and as such cannot be upgraded.

The pulse technology used in these weapons extends to other geth weaponry as well, namely the weapons of geth recon drones, and it may be related to the 'Siege Pulse' mass accelerator cannon on Geth Armatures and Colossi. They have a particular affinity for ripping through shields, as evidenced by the death of Richard L. Jenkins on Eden Prime. The body of Nirali Bhatia may have been withheld by the Alliance for research into better defenses against geth pulse technology, as her body had apparently been heavily damaged by the discharge of these weapons.

A handful of higher-ranking krogan on Tuchanka and Kureck in Jack's Loyalty Mission also wear Geth Armory's Rage series of armor, though lacking the distinct helmet. Gatatog Uvenk wears a modified variant of the Battlemaster series.