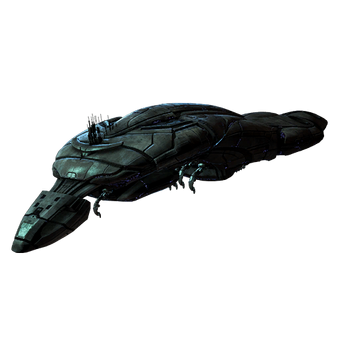 Scans of the geth dreadnought orbiting Rannoch reveal an intimidating array of features, from an improved main gun and ultraviolet antiship lasers to increased thruster output. The geth workforce never demands rest, wages, or autonomy, and in the creation of their flagship, they were limited only by time and raw materials. The damage inflicted by the quarian fleet appears minor at best.

Due to the nature of geth society, that they do not rely on an economic system and require only the mining materials found within Rannoch's asteroids, their only impediment to constructing a fleet capable of wiping out organic life – should that prove to be their intent – is the speed at which they can build it. Geth dreadnoughts, massive flagships falling outside the purview of Citadel regulations and constraints, make the geth armada a force to be reckoned with.

The geth dreadnought orbiting Rannoch is particularly formidable. It is 30% larger than a Systems Alliance dreadnought, and utilizes more expensive and energy-demanding ultraviolet anti-fighter lasers instead of the less effective but cheaper infrared anti-fighter lasers deployed by the warships of most organic races.

Retrieved from "https://masseffect.fandom.com/wiki/Geth_Dreadnought?oldid=517324"
Community content is available under CC-BY-SA unless otherwise noted.