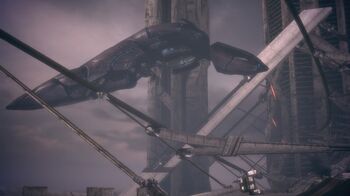 A Geth Dropship is a large, insect-like frigate capable of carrying large numbers of geth and rapid troop deployment. It appears almost organic in design, looking like an oversized hornet or wasp without wings. 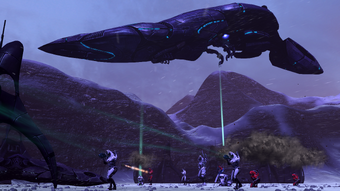 Geth Dropships are designed to drop geth units from overhead, often dropping Geth Armatures and Geth Colossi mid-flight. They also occasionally provide air support for the ground-based platforms in the form of a powerful projectile attack. Geth Dropships also have a defensive role; they can power energy fields to block key strategic points by latching onto the objective through the use of three superstrong claws. These claws are nearly impervious to damage by conventional weapons, but are capable of being destroyed by overpressurized hydraulic doors.

Dropships as a whole, while highly durable, can be damaged by sustained fire. Dropships that linger too long on a battlefield rain a steady stream of reinforcements but at the same time expose themselves to accumulated damage. During such an engagement, they will either exhaust their full complement of troops or escape before being completely destroyed, whichever happens first.

Like most geth vehicles, a dropship acts as a "mobile platform" for geth programs. The ship itself is a sentient mechanism similar to the ground-based Geth Armatures or Geth Colossi. If a dropship is damaged, it can transfer its programs to a smaller mobile platform to enact repairs, transferring the programs back to another platform once repairs are complete. 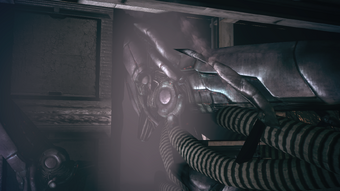 Geth Dropships are a key element of the attack on Feros. While one vessel remains anchored to the ExoGeni Corporation headquarters, other vessels begin dropping geth units directly onto the top of the tower that was home to Zhu's Hope, and landing heavy units on the Prothean Skyway. A Geth Dropship—described as a troop ship— is also used on Virmire to send emergency reinforcements to the bomb site during Shepard's attack.

If Admiral Hackett's directive to eliminate geth outposts is pursued, the Commander's team may encounter numerous dropships on uncharted planets. While other vessels perform quick troop drops before flying away, the dropship on Casbin in particular stays put over the battlefield, vulnerable to small arms fire.

During the Battle of the Citadel, Shepard's team is forced to engage one on foot, which is blocking their way across the Citadel Tower's exhaust plain. It can be dented only by the Citadel's defense turrets.

Dropships are still used by the geth in 2185, responsible for troop deployment on planets like Corang and Haestrom. On the latter world, one also provides air support, using heavy artillery to kill several quarian marines and collapse a pillar.

Other locations with Geth Dropships that can be visited by Shepard include Heretic Station, featuring three of the vessels docked to it. The ships can also be seen inside Prometheus Station on Aite.

Many dropships are seen defending the Geth Dreadnought and participating in attacks on quarian vessels during the quarian campaign to retake Rannoch from the geth. Geth Dropships form part of the mobilized geth armada and are used against the synthetics' enemies.