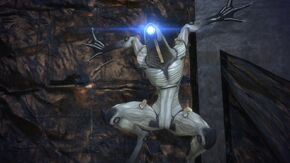 The Geth Hopper is a specialized geth platform, used primarily for stealth attacks, cyberwarfare and sabotage.

Hoppers are 'cyberwarfare platforms', meaning they have the ability to wreak havoc on hardsuit computers and weapons with Sabotage, Overload, or Damping. The Hopper's main attack is a powerful laser that comes out of its "eye". Like the Geth Sniper they also use a radar jammer. Hoppers tend to ambush in packs, using their rapid movement to cause disarray.

Hoppers are a subtype of the geth that the quarians don't recognize, hinting that the geth are 'evolving' beyond the forms originally created by the quarians. A Hopper's body is made of a springy synthetic substance that resembles organic muscle tissue. This can be compressed and then released, allowing the Hopper to jump enormous distances (hence the name given to them by Alliance soldiers). It has also tiny hooks on its hands and feet, meaning it can climb on walls and ceilings.

All Hoppers are lightweight and lightly armored, making them vulnerable to gunfire. Physics-based biotic attacks, especially Throw, will inflict heavy damage against Hoppers. The problem is getting them to hold still long enough for a clear shot. Happily, they are usually encountered indoors, and a Hopper usually leaps back and forth between two positions across a room, allowing you to hit them on their return jump. Lift works nicely to hold them in midair, especially if you're using a sniper rifle.

Some Hoppers use a powerful sniper laser resembling an Assassination ability to attack your shields, so be wary of any red beams. Apart from this they will focus on distracting you and using tech talents.