Gianna Parasini is the human secretary to Administrator Anoleis at Port Hanshan, on Noveria in 2183.

When the overzealous guards at the docking bay attempt to disarm Commander Shepard, Parasini orders them to stand down, having confirmed Shepard's Spectre status. Parasini then meets Shepard at the entrance to Port Hanshan and mentions in passing that Matriarch Benezia is on Noveria, having recently travelled to Peak 15.

As Anoleis' secretary, Parasini has an office right before the administrator's own, where she may give information regarding Noveria's lab facilities and the corporations behind them. She's in charge of setting up meetings with the administrator, and does so with Shepard's team. Later, if Anoleis refuses to give Shepard a garage pass necessary for the Spectre's mission, Parasini beckons Shepard over to her, remarking that the administrator is not the only person who has one.

Chiding Shepard's apparent inexperience with the corporate world and asserting that one doesn't just "bludgeon through bureaucracy," she hints that Lorik Qui'in, recently accused of corruption by Anoleis, has clearance to leave Port Hanshan. Shepard can follow her suggestion and, with Qui'in's clearance, raid the Synthetic Insights office for evidence that Anoleis is the one who is corrupt. The Commander is forced to shoot several ERCS guards, including Kaira Stirling.

After Shepard and the squad leave Synthetic Insights, Parasini meets them on the stairs and asks about the "reports of noise." Disbelieving any evasions Shepard may put forth, she then requests the Commander to meet her for a drink at the hotel bar. Shepard can choose whether or not to oblige.

If the Commander meets her, Parasini reveals that she is an agent for Internal Affairs. She is employed by the executive board and has been under cover, investigating Anoleis' corruption for six months. However, her position does not give her access to evidence that will help convict Anoleis: "He's a crook, not a moron! He doesn't keep logs on his computer saying 'This month I stole three million credits!'" She asks Shepard to convince Qui'in to testify — his evidence and testimony are everything she needs. In return, she will give Shepard a garage pass.

At this point, Shepard can choose whether or not to assist Parasini by convincing Qui'in to testify. If Shepard helps, Parasini voices her surprise, given that the Spectres are able to operate outside the law. Nonetheless, she is grateful for the assist. She then arrests Anoleis, hauling the salarian off as he demands Shepard to arrest Parasini for what she has done. As she leaves, Parasini cheerfully says she owes Shepard a beer.

Alternatively, Shepard can betray her by warning Anoleis that Parasini is about to arrest him, allowing him to prepare his pistol for self-defense. When Parasini goes into Anoleis' office, gunshots are heard and Shepard later finds both of them dead. Shepard can also choose to ignore Parasini's request, and simply hand over the documents to Qui'in. In that case, both Anoleis and Parasini stay alive, the secretary only telling Shepard how disappointed she is.

Parasini hates her secretary outfit, and may say as much to Shepard if Anoleis is arrested or if her investigation is bungled by the Commander handing over the evidence to Qui'in instead of convincing him to testify. 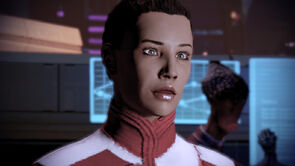 If Parasini did not die, she can be found on Nos Astra near a Serrice Technology kiosk, now wearing an outfit with pants. If Shepard helped her pin evidence on Anoleis, Parasini makes good on her promise of buying Shepard a beer. After their brief chat, Parasini quickly excuses herself but not before leaving Shepard a note, seeking Shepard's help once again; this time to arrest an asari smuggler named Hermia.

If a male Shepard helps Parasini on Noveria and Illium, she will reward him with a kiss on the cheek. If Shepard didn't help Parasini on Noveria, she will still ask for help on arresting Hermia, but will not give Shepard a kiss. Alternatively, Shepard can choose to warn Hermia, at which point Hermia will run away. In this case Parasini will simply ask herself, "why do I even bother?"

Through conversations on Illium, Gianna reveals a bit of her past. She grew up poor, and originally intended to become a cop or C-Sec officer. She enjoys solving white collar crime, as she still has the thrill of the chase, but doesn't have to deal with anything too disturbing.

When asked about the nature of her next mission, Gianna mentions that some people are interested in dark energy and whether it's something her superiors should be concerned about. This could possibly be linked to the star Dholen which was rapidly aging due to dark energy.