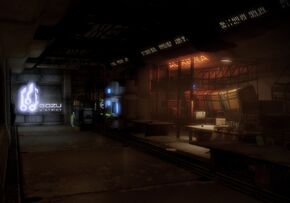 Gozu District is a residential area in the lower levels of Omega. Gozu is home to the Kokomo Plaza and the Omega Clinic, and has a life support system independent of the rest of the station's systems. The district borders Doru and Kima Districts.

For many years, the Blue Suns provided security for the residents of this district. Under their rule, this mercenary organization prevented crime and kept residents in line. Sometime in mid-2185, this situation changed as a result of outside influences. The Blue Suns came under attack from a vigilante group headed by the Archangel, and watched their numbers decline by half in Gozu as a bio-engineered plague which affected all species except humans and vorcha devastated their ranks.

In late 2185, Tarak, the leader of the Blue Suns, allied his organization with the Blood Pack and Eclipse, and planned an offensive against the Archangel from a base in the Gozu District. At the same time, a plague engineered by the Collectors was introduced into the residential blocks of the neighborhood. Omega's de facto ruler, Aria, ordered the district quarantined and placed guards to the entrances into the contaminated area. Seeing a power vacuum forming as batarian and turian members of Blue Suns began dying, the Blood Pack started to muscle its way into the district.

During Aria T'Loak's campaign to liberate Omega from Cerberus occupation in 2186, the final assault on Cerberus's command center at Afterlife advances through Gozu District. The Mad Prophet can be seen preaching to a large crowd in one of the district's corridors.

Retrieved from "https://masseffect.fandom.com/wiki/Gozu_District?oldid=370814"
Community content is available under CC-BY-SA unless otherwise noted.