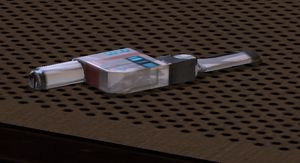 A graybox is, essentially, a collection of snapshots of a person's memories. Launched by Synthetic Insights in 2160 CE and originally developed to help treat Alzheimer's disease, it was determined that its implant procedure has dangerous side-effects: should the graybox either need to be removed for maintenance purposes or if it developed software bugs, extensive brain damage would occur. As such, its usage was ultimately restricted to people who sorely needed eidetic memories, like researchers and intragalactic spies. When a graybox is accessed by a specialized reader, the collection of memories contained within appear as snapshots, while the memory being viewed is played as a video.

Only two individuals are known to have grayboxes, partners Kasumi Goto and the late Keiji Okuda. Keiji was killed by Donovan Hock for his heavily-encrypted graybox. Hock has been trying to crack it since he obtained it for the information that Keiji recorded in it. Kasumi was planning to take it back, and after seeking out Cerberus, which had been attempting to contact her, saw an opportunity to get it back.

If Kasumi is recruited by Commander Shepard, the Commander can choose to help her retrieve Keiji's graybox from Donovan Hock on Bekenstein.

Hock has a decryption team working on the graybox but their brute-force methods have no success in cracking it by the time of Shepard and Kasumi's infiltration. They have just suggested looking into alternative decryption means in their latest report, on a datapad in Hock's bedroom.

After fighting through Hock's hired Eclipse security and Hock himself, Kasumi and Shepard manage to retrieve and access the graybox.

Keiji's graybox contains information that, if revealed to the Citadel Council, would implicate the Alliance in something "big". The encryption key to the information was uploaded to Kasumi's own graybox, ensuring that no one else would be able to see it. Various images of what seems to be Reapers are interlaced with Keiji's romantic memories of Kasumi, and there is no way of sifting the information from the memories. A prerecorded holo-message from Keiji relays all these intel to Kasumi, and insists on having the graybox destroyed for her own safety.

Because of the information's dangerous nature, after taking advice from Shepard Kasumi then has the option to follow Keiji's wishes or to keep the graybox intact.

The information within Keiji's graybox is revealed to be incriminating evidence of an Alliance black ops raid on a batarian research station possessing Reaper technology. The raid turned into a massacre, but the Alliance returned empty-handed and they faked a power failure to hide the incident. If Kasumi retrieved the graybox, she leaks the information. Otherwise, Donovan Hock is apparently successful in cracking the device. Regardless of prior events, this information makes its way to salarian Spectre Jondum Bau in connection to a case he's pursuing.

At the conclusion of the Reaper war, if Keiji's graybox wasn't destroyed, then Kasumi can be seen holding either it or a holographic representation of Keiji, depending on Shepard's choice.