Lieutenant Gregory Adams is a human Earth Systems Alliance engineer in the 22nd century. He was hand-picked by Captain David Anderson to serve as the Chief Engineer of the SSV Normandy. Engineer Adams has served on every class of Alliance starships. Prior to being assigned to the Normandy, Adams served on the SSV Tokyo, which he describes as a "good ship" but added that the SSV Tokyo "couldn't hold a candle to the Normandy". Adams becomes very enthusiastic while discussing the Normandy, claiming she is the best ship he has ever served on. Adams will provide Commander Shepard with some background on the ship's IES stealth system and engines.

On board the Normandy, Adams and Navigator Pressly maintain a good friendship with each other. Shepard overhears a conversation between them talking about the ship's communication system while going to meet Nihlus Kryik in the comm room. In their conversation, Pressly wonders about how strange it is to have a turian Spectre aboard the Normandy, but Adams tells Pressly to relax or he would cause himself to have an ulcer. Unlike Pressly, Adams is very calm and even-tempered, tending to accept things as they come. When Corporal Jenkins was killed in action on Eden Prime, Adams was sad to hear about his death and told Shepard that he is "sorry to hear about Jenkins".

Adams does not seem to have any problems with having non-human crew members aboard the Normandy. When Tali'Zorah nar Rayya comes aboard the Normandy, Engineer Adams is very impressed with her technical knowledge and skills and even approves of Tali, despite her being a quarian. Adams wishes that his engineering team was half as smart as her. He also mentions to Commander Shepard that if Tali was onboard for more than a month, she would know more about the engines than he does. Because of that Adams was quick to take her under his wing and made sure that she feels welcomed, especially in the engine room. The two of them often worked together dismantling any orbital probes or wreckage found during planetary surveys.

Unlike the rest of the crew, Adams was completely unperturbed when Shepard stole the Normandy and headed to Ilos. He heard that the Normandy SR-1 was heading to the Terminus Systems and assured Shepard they were ready for anything.

Following the destruction of the SSV Normandy, Adams and most of the surviving crew were reassigned. Two years later, Dr. Chakwas and Joker joined the Normandy SR-2 crew as members of Cerberus but Adams did not. After joining the crew of the Normandy SR-2, Tali remarked that Adams' absence was proving difficult to get used to.

Engineer Adams returns to his post aboard the Normandy SR-2 after it is turned over to the Alliance. He was the first to realize that EDI wasn't a VI, but an AI. Later on, Adams mentions that when Dr. Chakwas received the offer from Cerberus to assist in fighting the Collectors, she had invited him to accompany her on the Normandy, but Adams refused to go. He apologizes to Shepard about this at their first meeting. 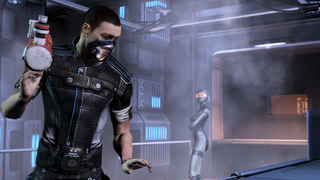 Adams proceeds to the AI Core's door lugging a fire extinguisher when the Normandy experiences a minor crisis in the form of EDI going offline after Shepard's mission to extract the turian primarch from Palaven. With the core sealed and automated systems containing the fires that started within, Adams informs Shepard that he'll follow their lead. The core still has smoke and minor fires when they enter, and Adams blasts away with his handy extinguisher. From the fog emerges EDI in Eva Coré's body, claiming to have seized control of it. While Shepard converses with the AI, Adams walks to the side and begins checking the computers nearby.

If Mordin is not present, Adams contacts EDI on the comm after the mission on Sur'Kesh. He discusses the tests for the IFF upgrade, noting that EDI has a few million duplicate encryption keys. He's amazed when he finds out that the encryption keys "evolve" after EDI explains her actions, further getting the implication that all the copies must be made to seem like a living Reaper.

He goes back to the topic of refusing Shepard's call, discussing this with Dr. Chakwas or Dr. Michel, depending on whom Shepard recruited, in the Crew Quarters sometime later.

If Dr. Michel is present, Adams recounts how Dr. Chakwas attempted to convince him to join Shepard back in 2185, but because of run-ins with Cerberus back in 2183 (or bad rumors about the organization if never encountered earlier) along with the seemingly tall tale Shepard is back from the dead, he refused. In hindsight, he remarks he should've stuck with his friends. Now that Dr. Chakwas has moved on to the Crucible, Adams informs Dr. Michel he misses working with Chakwas, appending the "no offense" disclaimer at the end.

If Dr. Chakwas is present, Adams blames himself for letting her and Shepard down and wished that he had been there to help when the Collectors abducted the crew. Chakwas then assures him that he is the most loyal man she had ever known and tells him to stop dwelling on the past and focus on the current mission. Adams gives in and says that he will keep it together.

Adams asks to meet the Commander on the Engineering deck after the conversations in the crew quarters. There, he explains that the Normandy's drive core system can be made safer by installing a GX12 thermal pipe, which will prevent the core venting into the Engineering compartment during heavy kinetic bombardment.

If the Commander purchases the thermal pipe, Adams says with confidence that the Normandy would explode long before the core ever vented into Engineering, to which Shepard wonders whether that is a good thing. If Engineers Kenneth Donnelly and Gabriella Daniels are around, Adams reports the successful installation, with the added bonus that Ms. Daniels made a breakthrough. Daniels and Donnelly deduced theoretical improvements to the ship's eezo capacitors while Adams and EDI ran the tests, and concluded while the improvements cannot be applied to the Normandy it can be used on the Crucible instead.

Adams is a firm proponent of synthetic life as a valid form of sapient life, and he frequently debates his views with some of the Normandy crew. He takes the stance that EDI is the Normandy and her "mind" (AI core) can't simply be transplanted to another "body" (ship), in contrast to Donnelly's view that EDI and the ship are separate entities. Sometime after the destruction of the geth dreadnought above Rannoch, Adams is debating with the Normandy doctor in the mess hall about fundamental comparisons between organics and synthetics, still espousing the idea synthetics have just as much right to live as organics as opposed to the doctor's more Luddite view. In both arguments, Shepard can offer an opinion to settle things.

If Kaidan is present, after the mission to Thessia, Adams is found talking with him in the Engineering deck. They praise Liara's strength and will to deal with all of her losses: her mother and now, her homeworld. They also reminisce about her talks with them back in 2183.

Nearing the final battle for Earth, Adams informs his Commander that the Normandy is as ready as she'll ever be, and if he has Donnelly and Daniels with him, he says they're doubly prepared for whatever is ahead. He closes with the standard words of military farewell: "It has been an honor and privilege to serve with you."