Grenades are hand-tossed explosive charges that appear in Mass Effect, Mass Effect 2, Mass Effect 3, and Mass Effect: Andromeda in different forms. Depending on the game, grenades can be used by the player, NPC allies, and also enemies. 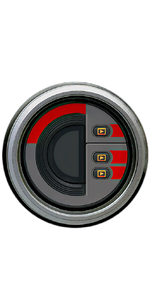 Most grenades can adhere to flat surfaces and have a 10-second fuse, allowing them to be used as makeshift shaped-charge mines or booby-traps. They can be triggered to detonate before their fuse runs out by a signal from any military hardsuit’s built-in communications gear.

Once thrown, a grenade will automatically explode after 10 seconds if not manually detonated sooner. Only the player, as Commander Shepard, can use grenades during actual gameplay; Saren and Tali appear to throw grenades (possibly tech proximity mines) in cutscenes.

Throughout the game, grenades can be found in crates. When opening a crate, look to the bottom left of the HUD for the grenade symbol with a number beside it showing how many grenades have been acquired from that crate. There is also a chance of replenishing grenades from killing enemies (this occurs automatically, though a popup notification should appear in the HUD). Grenades are not refilled between missions or assignments and can only be replenished from the environment.

Note: If Shepard completes Admiral Ahern's special scenario on Pinnacle Station, he gives Shepard his home on Intai'sei. Inside is a device that will allow the Commander to fully replenish their grenade stocks.

During Mass Effect, Commander Shepard will have access to four main types of Grenade Upgrades: Cryo, Fusion, Incendiary and High Explosive. A mission from Juliana Baynham on Feros will give Shepard access to a fifth type of grenade which contains Anti-Thorian Gas. Grenade efficiency and damage can be increased through higher levels of grenade upgrades and the grenade carry limit can be increased from various vendors throughout the game.

Two types of grenades appear as loyalty powers in Mass Effect 2 available only with DLC. Unlike the other games, grenades in Mass Effect 2 are not limited by quantity but function on cooldowns like all other powers. Grenade powers are lobbed like traditional grenades when used by Shepard, rather than homing in on a target.

The grenade powers are:

Note: Unlike other powers, Inferno Grenade can damage Shepard and squadmates.

Grenades appear in Mass Effect 3 as Grenade Powers. Unlike in Mass Effect, most grenades in Mass Effect 3 are lobbed like traditional grenades when used by the player with the projectile being affected by gravity. Some grenade powers are fired as offensive projectiles or primed from the omni-tool to augment personal defenses. Unlike regular powers, grenades do not have a recharge period and can be thrown at any time regardless of the recharge state of the user's other powers, but on the downside they are limited in quantity for both the player and NPC allies. Grenades can be replenished from caches in the environment, but killed enemies never drop them as they do thermal clips. In single-player Shepard and allies begin every mission at max grenade capacity.

Note: In single-player grenades will never be used automatically by allies even when Squad Power Use is set to Active; Shepard must manually order them to use grenades. An exception to this is Urdnot Wrex in the Citadel DLC missions who will use both his Lift Grenades and Stimulant Packs aggressively even when Squad Power Use is disabled; this behavior is likely a bug. Allied grenades impact targets instantly as their other powers do, and clear line of sight from Shepard (not the squadmate) to the intended target is needed for successful hits.

Grenades can be used by enemies against the player and player allies.

In Mass Effect, grenades are not used by enemies, though many enemy tech powers (Sabotage, Overload, Damping) are deployed via tech proximity mines that have an area of effect and detonate if the player or squadmates get too close. These mines are rarely seen as AI aiming is near-perfect so the mines connect and detonate instantly with use as long as there was an unobstructed line of sight.

In a few Mass Effect 2 DLC missions, some enemy foot soldiers throw Flashbang Grenades. When used by enemies, flashbangs have a delayed fuse and a telltale whine prior to detonating, and enemy radio chatter may also provide a warning that a grenade has been thrown. Enemy flashbangs can deal heavy damage to shields in addition to staggering and blinding effects.

In Mass Effect 3, enemy use of grenades is common and a major threat in combat in both single-player and multiplayer. In single-player, enemies tend to throw grenades at Shepard only. In both modes, grenades are directed at the player with a very high degree of accuracy across even long distances; however, enemies that throw them tend not to take intervening terrain into account and often futilely attempt to throw grenades straight through walls or other cover. Enemies that can use grenades use them with greater frequency at higher difficulties. 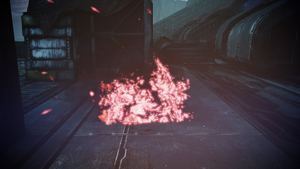 Enemy grenades can't be picked up or deflected once thrown, though the throwing enemy can be interrupted or killed in the act of throwing. The player will be warned of grenades that land nearby with an indicator on the HUD that also points to where the grenade is relative to the player; however, this indicator often fails to appear if the player moves into an area where a live grenade has already landed, or for other reasons. Grenades also produce a distinct bounce sound that experienced players will recognize as well as a high pitched beeping that ends in a whine right before detonation. The beeping corresponds to a blinking red light on most grenades that serves as another visual warning of a grenade's location.

Grenades deal heavy damage that ignores shield and health gates, and thus can be instantly fatal if the player was already damaged or in very close proximity to the detonation. Grenade explosions also stagger the player and squadmates near the blast zone. In single-player, squadmates take reduced damage from grenades and don't usually take any action to evade them.

As enemy grenades can't be thrown back by the player or dislodged in any way, they essentially force the player to displace to a new location. Experienced players will anticipate enemy grenades and always have alternate cover locations or avenues of retreat planned ahead of time to avoid being boxed in or flushed out into a kill zone. Live enemy grenades still active after all enemies in the area have been eliminated will not go off. 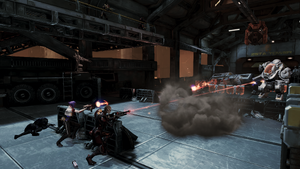 A few enemies in Mass Effect 3, notably the Cerberus Centurion, can deploy smoke grenades. These instantly create temporary smoke screens that obstruct the player's line of sight and targeting. Smoke can interfere with manually reviving downed members of the squad; it can mask enemy movements and locations; it can prevent the player from seeing live enemy grenades on the ground; and possibly worst of all, it can prevent the player from locking on to enemies for the purposes of hitting them with powers. This last disadvantage can be especially deadly for Vanguards relying on landing biotic Charges to stay alive.