Even visual scans show that Habitat 7 is no longer a promising settlement world. The planet's atmosphere is largely argon-nitrogen, and little of the projected plant life has survived.

ANALYSIS:
A standard monitoring satellite. Its registration shows that it was deployed accidentally from the Hyperion during its collision with the Scourge. 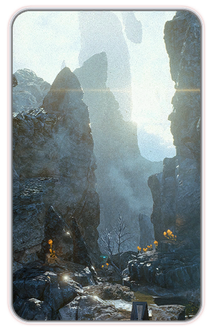 The planet known as Habitat 7 was one of the "golden worlds" selected by the Andromeda Initiative for early settlement. Signs pointed to a lush and biologically diverse tropical region that could easily support an outpost.

With no communications from the Nexus or sister arks upon arrival in the Heleus Cluster, the Hyperion approached Habitat 7 to begin survey and settlement operations as soon as possible, but even visual assessments showed that the planet was no longer viable. Habitat 7 is now a storm-wracked world with an unbreathable argon-nitrogen atmosphere. Intense magnetic activity in unknown metallic elements interacts with the storms, causing interesting but highly destructive electrical phenomena.

The investigating Pathfinder team encountered hostile alien life and strange technology on the surface. Reactivating this technology caused a noticeable change in the conditions on Habitat 7. However, the planet is still unsuitable for settlement, and the resulting activation ultimately claimed the life of Alec Ryder, the human Pathfinder. 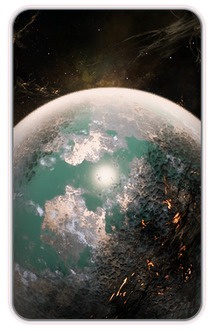 The planet formerly known as Habitat 7 was one of the "golden worlds" selected by the Andromeda Initiative for early settlement. The first attempt to land there came at great cost, including the life of then-Pathfinder, Alec Ryder.

But now, as a result of the perseverance of his son/daughter, the current human Pathfinder, the Initiative is returning to the planet. Pathfinder Ryder has achieved viability across Heleus, gaining the resources for extraordinary efforts here. And to honor their achievement, the world has been renamed Ryder-I.

Ryder-I remains storm-wracked, with intense magnetic activity. The Remnant vault on the planet is still nonfunctional, and restoring the network influence of Meridian has not changed that. But vaults are not the only means of making worlds livable.

The Andromeda Initiative has begun traditional terraforming, starting with atmospheric manipulation to alter the climate. It is a lengthy and costly process, one that only 100% viability across the cluster has enabled. Ryder-1 will be a future golden world, developed from the ground up by the people whose children will eventually call it home.

Retrieved from "https://masseffect.fandom.com/wiki/Habitat_7?oldid=516538"
Community content is available under CC-BY-SA unless otherwise noted.