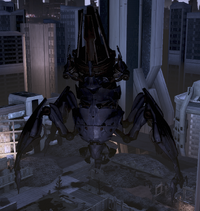 The Hades Cannon is an anti-aircraft weapon of Reaper design. It is a massive directed-energy cannon, capable of being mounted on a four-legged chassis that resembles a smaller Destroyer-class Reaper. Several Hades Cannons were utilized by the Reapers during their assault and occupation of Earth. They are highly accurate as well as powerful, as they are capable of shooting down craft as small and nimble as a UT-47A Kodiak Drop Shuttle. During the final battle for Earth, Commander Shepard destroyed one of these Cannons using a M-920 Cain to clear the way for the galactic fleet's ground forces, codenamed "Hammer", to land.

Retrieved from "https://masseffect.fandom.com/wiki/Hades_Cannon?oldid=462254"
Community content is available under CC-BY-SA unless otherwise noted.