For the Collector enemy of the same name, see Harbinger (Collector).

Mass Effect 2
Mass Effect 3
“That which you know as Reapers are your salvation through destruction.”

Harbinger is a Reaper who resides in dark space with the rest of the Reaper fleet. It is the overseer of the Collectors' operations, frequently possessing individual Collectors to fight battles personally. Harbinger's involvement first began two months after the Battle of the Citadel, when it made a deal with the Shadow Broker to gain possession of Commander Shepard's body following the destruction of the SSV Normandy. This did not succeed, however, and Shepard would go on to be resurrected by the Lazarus Project while Harbinger advanced its sinister plans for the galaxy.

Harbinger is the mastermind behind the Collectors, controlling them by possessing the Collector General. It directs the Collectors to abduct the entire population of human colonies in order to process captives and use them to create a Human-Reaper.

While controlling the Collector General, Harbinger is capable of "assuming direct control" of any individual Collector, often doing so when the Collectors are engaged in combat with Shepard. While controlling a Collector, Harbinger is able to speak through them, usually to command other Collector troops, or threaten its opponents. However, the process of possession appears painful or traumatic to the possessed Collector, and it always disintegrates when defeated. This effect is very similar to Sovereign's possession of Saren Arterius's corpse. 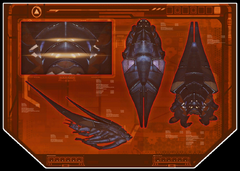 Harbinger shows a personal interest in Shepard, particularly a continuing interest in recovering the Commander's body, as it orders the Collectors to recover Shepard's corpse intact if possible during battles. This could be another consequence of Shepard destroying Sovereign, and drawing the Reapers' personal attention as a result, or relate to the Reapers' orders to gather human genetic material.

After Commander Shepard's team assaults the Collector Base and destroys the still incomplete Human-Reaper, Shepard can either destroy the base completely, or purge the base of all life. Both options will result in Harbinger proclaiming Shepard's failure to prevent the Reapers' arrival - humanity already has the Reapers' attention. It then begins relinquishing control of the Collector General and vows that the Reapers will "find another way." Harbinger is then seen with the rest of the Reapers in dark space, moving toward the Milky Way galaxy. 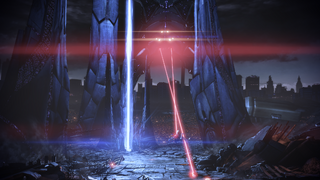 During the Reaper War, Harbinger is one of the Reapers who leads the attack on Earth. Alliance intelligence suggests that Harbinger is the oldest and largest Reaper of the entire fleet.

Harbinger appears during the final battle in London and launches a devastating attack on allied forces attempting to reach the Citadel through the conduit, using weapons that are considerably faster than other Reapers'. It leaves when it appears that Shepard and the rest of the counterattack have been wiped out. Despite its efforts, Shepard and David Anderson make it through, though they are both heavily wounded.

If Shepard chooses to activate the Crucible, Harbinger's fate is presumably the same as the other Reapers'. It is either destroyed with all other synthetic life, brought under Shepard's control and used to rebuild and protect the galaxy, or it willingly helps to rebuild the galaxy and disseminate its knowledge after organic and synthetic life are merged. If Shepard refuses to activate the Crucible, then Harbinger is presumably defeated along with the other Reapers in a future cycle.

During its encounter with Shepard, Leviathan reveals that Harbinger was the first Reaper created, and that it was formed in the image of the Leviathans. The Catalyst directs the Reapers to harvest the galaxy of advanced life every 50,000 years, and each harvest ends with the birth of a new Reaper made in Harbinger's image.

Retrieved from "https://masseffect.fandom.com/wiki/Harbinger?oldid=516708"
Community content is available under CC-BY-SA unless otherwise noted.