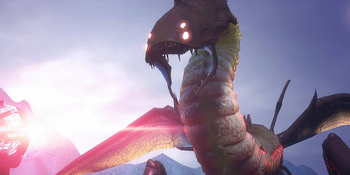 Harvesters are huge creatures that inhabit several worlds throughout the galaxy, including Tuchanka and Tarith.

Harvesters are intimidating creatures, being nearly a third of the size of a Thresher Maw and highly aggressive. Their primary means of attack appears to be flying low and "dropping" klixen. This could mean that harvesters either birth klixen or simply pick them up and relocate them. Either way suggests a rather fiendish intelligence; the harvesters are smart enough to use klixen both as shock troops and, failing that, mobile ordnance.

During the Reaper invasion of the galaxy, numerous harvesters were corrupted and utilized by the Reapers as troop transports, atmospheric superiority craft, and ground support.