The ancestral home of the angara is a lush jungle planet. However, scans detect plant life on Havarl exhibiting maladaptive, unsustainable growth patterns. The abnormal mutation suggests something is terribly wrong with Havarl's ecology.

The ancestral home of the angara is a lush jungle planet. With the vault correctly activated, the jungles are showing clear signs of recovery, overseen by both angaran and Nexus scientists. 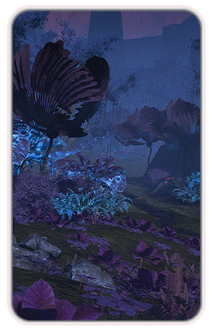 As Jaal explains, Havarl is considered the ancestral home of the angara. The ruins of angaran cities are a draw for researchers, looters, and angara who defy the kett to make pilgrimage. The planet's history also makes it a symbolic staging ground for the ruthlessly xenophobic Roekaar.

Long-range surveys by the Andromeda Initiative indicated Havarl was a garden world of lush green jungles and abundant liquid water. The planet was considered a "golden world," and given the label Habitat 3.

Our observations today show Havarl is unrecognizable. The jungles now dominate much of the planet's surface, demonstrating bizarre growth patterns. Samples show grotesque mutations and hormonal changes in the jungles' plant life, rendering it not only extremely hardy but hazardous for consumption. These factors point to a large-scale shift in Havarl's ecology that bears investigation.

With the Remnant vault stabilized and correctly activated, both angaran and Nexus scientists report a noticeable improvement in Havarl's plant life. The more aggressive and mutated species are dying back, supplanted by soil-enriching and pollinating varieties.

†One or the other depending on completion of Stage a Rescue