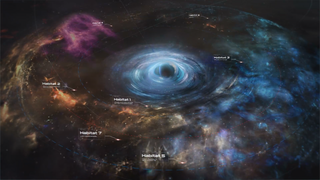 The Heleus Cluster is a seemingly resource-rich region of space in the outskirts of the Andromeda galaxy. It consists of 38 star systems and hundreds of planets. At its apparent center lies a massive black hole, the formation of which may have been the cause of the cluster's rich Element Zero deposits. The extragalactic travelers from the Milky Way known as the Andromeda Initiative plan to establish a foothold in the Heleus Cluster by settling an initial seven viable locations known as golden worlds.

The cluster has a high prevalence of ringed terrestrial worlds in comparison to those that can be visited by Commander Shepard in the Milky Way.

During Ryder's travels throughout the Heleus Cluster, systems are able to be scanned using the Tempest. Below is a table of all of the rewards that can be found. Note: Some anomalies may not be available until placed in the system by a specific mission.