Location: Milky Way / The Phoenix Massing / The Sea of Storms 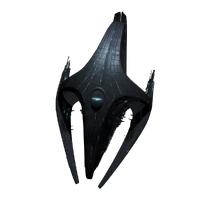 Once called Haratar by the quarians, this space station was stripped of its useful technology by the fleeing Migrant Fleet when they left the Perseus Veil 300 years ago. Little more than a cold metal superstructure floating in the void, the station was removed from star charts by 2050 CE.

Scans indicate the station was reconstructed and upgraded in a massive effort that must have taken at least ten years, implying that there may have been some geth outside the Veil before their infamous attack on Eden Prime. Needing little but a fuel source, it could have been hidden here for much longer without attracting attention from the barren worlds around Tassrah or the clueless elcor in the Salahiel system.

Heretic Station, as Legion refers to it, is home to a geth data core, capable of broadcasting vast distances through tightbeam projection. Approximately 6.6 million copies of geth software are stored in the station, the majority of which are kept bodiless in servers and downloaded to legged platforms when needed. The station's "population" of legged platforms is approximately 2.4 million.

Retrieved from "https://masseffect.fandom.com/wiki/Heretic_Station?oldid=517294"
Community content is available under CC-BY-SA unless otherwise noted.