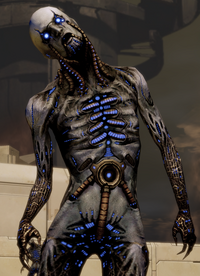 Husks are synthetic-organic "zombies" created from the bodies of organic beings.

When a target person is captured, they are placed on impaling devices, huge spikes that Alliance marines have nicknamed "dragon's teeth". Over time the body's organs, skin, and water content are converted into cybernetic materials; blood is changed to a sickly green fluid, and the body generates an electrical charge.

When the spikes are approached — say, if marines try to recover their dead comrades — the husks are released and attack. The husks will charge at their enemies and, once close enough, give off a powerful electrical blast which disables shields and causes massive damage.

Fully-converted husks do not retain any vestiges of their former personalities.[1] 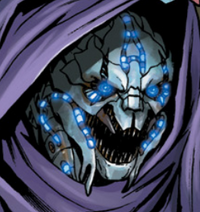 During the First Contact War, General Desolas Arterius led a turian operation on the human colony of Shanxi to recover an ancient alien artifact, the Arca Monolith. The Monolith had the ability to transform anyone who came into contact with it into synthetic beings devoted to its protection. Desolas planned to use the Arca Monolith to convert the turian race into an army of invincible "meta-turians" to dominate the galaxy and took the artifact back to Palaven, the turian homeworld, to begin this process.

A human mercenary, Jack Harper, captures Desolas's interest when he is only partially exposed to the Arca Monolith. Instead of transforming completely and becoming a thrall of the artifact, only Jack's eyes are visibly altered and he retains his mental faculties, although he is able to "sense" the whereabouts of the artifact across vast interstellar distances and develops the ability to understand alien languages. Desolas uses the artifact to lure Harper into a trap and brings him to Palaven. He intends to study Harper to learn how to create meta-turians that also retain their intelligence.

Before his plans can come to fruition, however, Harper convinces Desolas's brother, Saren Arterius, that the Monolith is devolving the turians, not uplifting them to immortality. At the same time, the meta-turians Desolas had already created begin excavating a second alien artifact that had been sealed away underneath the historic Temple Palaven to begin mass conversions. Saren orders an orbital strike on Temple Palaven, destroying it along with Desolas and the meta-turians. 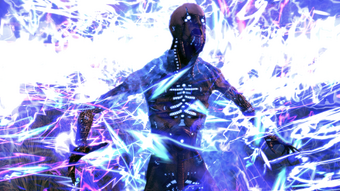 Husks are extensively encountered first on Eden Prime and then anywhere humans have been fighting the geth. No one knows why the geth do this to their captives. It seems like a lot of effort for a small result, though it is effective as a psychological warfare tactic to make soldiers fight their own dead. The geth used a ship full of husks, the MSV Cornucopia, partly as a trap and partly as a warning to other organic races not to enter their space.

Cerberus was studying husks as part of their experimental programme into creating a super soldier, and as a test they deliberately exposed a colonial pioneer team on Chasca to dragon's teeth. There were also husks in Saren Arterius' research facility on Virmire, possibly as part of his study of indoctrination.

When Sovereign "possesses" the implants within Saren's body, the resulting creature strongly resembles a husk, and the Reaper indoctrination effect is similar to the "zombie" nature of husks, which suggests that the dragon's teeth are Reaper technology. A cache of the spikes was found buried on Trebin and had to be excavated by the local research team, but there is no evidence of who put them there or why.

Husks are now known to be of Reaper origin. It is noted that the geth gained their dragon's teeth from Sovereign.

The Collectors appear to make use of husks along with several new husk variations, namely, the Abomination, Scion, and the Praetorian, all of which are noted to be more advanced than those previously fought by Commander Shepard. It is also noted that no dragon's teeth are seen at places where the Collectors deploy husks. Shepard and the squad speculate this indicates the husks were transported by the Collectors from elsewhere, although this is never confirmed.

These husks are encountered along with Abominations and Scions aboard a derelict Reaper when a science team falls victim to the Reaper's indoctrination. Shepard and the squad find multiple dragon's teeth onboard, indicating that the husk variants were used by the Reapers at least 37 million years ago. It is currently unknown why the husks used by the geth were less advanced and no other husk variants were seen alongside the geth. The basic Collector-produced husk seems somewhat different than geth-produced husks, lacking the electrical attack and using armor for defenses rather than kinetic barriers.

An excavation team in the Minos Wasteland on the planet Aequitas found a Reaper artifact that creates advanced husks. This device does not resemble dragon's teeth at all, instead featuring an orb of energy that turned the excavation team into husks with what appears to be a form of indoctrination, according to logs kept by the team, before it started creating more husks.

The Collectors are known to employ three husk forms more advanced than those previously encountered:

Following the Collectors' defeat, Cerberus had established several research bases beyond the Omega 4 Relay to study the various Reaper artifacts discovered there. One of these bases, Avernus Station, was used to study the Reaper-made husk-like creatures known as Adjutants. At some point the Adjutants escape containment and use Cerberus transport ships to attack Omega.

The Adjutants' main goal is to transform organic beings into more Adjutants. If possible, they will try to avoid killing organics so that they can be "infected" instead. After being exposed to an Adjutant, an individual will gradually begin to assume the physical characteristics of an Adjutant as its physical and genetic structure is rewritten. The transformation process has no known cure and can only be stopped by killing infected individuals and removing their heads. 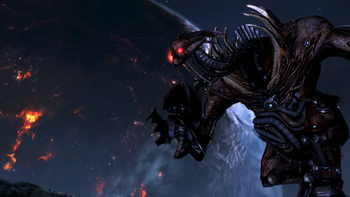 As the Reapers invade the galaxy and capture inhabited worlds, the populations of those worlds fall victim to Reaper experimentation. Reaper victims that are deemed inadequate to be processed for DNA are converted into husks to be used as ground troops. Each type of husk produced from a different race serves a different role on the battlefield.

Research logs found at Cerberus' "Sanctuary" facility on Horizon reveal new information about the husk creation process and their role in Reaper communication. According to Cerberus researchers, the nano-machines responsible for transforming an organic victim into a husk "ride" on molecules of adrenaline (or analogous chemicals in non-humans), allowing them to quickly spread throughout the body. Other logs reveal that in addition to serving as combatants, each husk functions as a transmitter node for Reaper signals, allowing the Reapers to communicate through them.

The Reapers are known to employ the following husk forms on battlefields across the galaxy:

Omega found itself infested with Adjutants during its hostile takeover by Cerberus forces. Although of Reaper origin, Adjutants were first conceived by Cerberus to be an army of obedient troops. Being genetically engineered off a Reaper-based virus, the first test subjects proved to be flawed and were deemed uncontrollable, leading to a wave of rogue Adjutants spawning throughout Omega unchecked until Cerberus could contain them. Their control over the Adjutants was later then refined and perfected, as shown when General Petrovsky unleashes the latest breed upon Aria T'Loak and Commander Shepard in Afterlife.