Laser "eye", Canister (on back)

The Hydra is a Roekaar and Outlaw unit. These sturdy mechs are the heaviest hitters in both armies and require as much firepower as they dish out to destroy.

Hydras encountered by Pathfinder Ryder can be inserted into battle from the air. On Firebases they typically appear in later waves as a "boss" target or as high-value but difficult to destroy enemies.


ANALYSIS:
A lumbering combatant in a makeshift mecha suit that unloads a variety of devastating weapons as it advances. Boosters can be used to engage at close range. 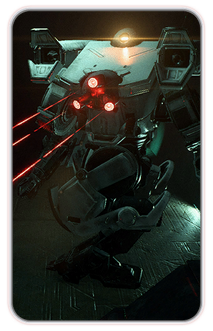 The strange technologies of the Heleus Cluster offer many outlaw and exile groups opportunity rather than scientific mystery. With access to black-market salvage, Remnant technology, and stolen gear from the Andromeda Initiative, some have crafted non-standard but highly effective battle mech suits nicknamed "Hydras."

Most Hydra units are armed with a chain gun and a devastating laser-guided RPG volley, pinning down enemies before bombarding them with heavy fire. Unapproved jumpjet designs and a mass-lowering element zero core assist in ground clearance or leaping at a target. The sheer weight and impact of the Hydra unit can crush enemies or force them to fall back. APEX officially classifies a Hydra unit as a Priority Zero threat, though unofficial communications often use the acronym "BFM."

The Hydra's left arm is a large cannon. In addition to this, it is capable of shooting off a barrage of laser-guided missiles. Its right arm is a claw capable of grabbing enemies, throwing them, and slamming them into the ground.

Hydras are protected by heavy armor.

Retrieved from "https://masseffect.fandom.com/wiki/Hydra_(enemy)?oldid=516113"
Community content is available under CC-BY-SA unless otherwise noted.