Someone is making trouble in Eternity, the popular bar on Illium. 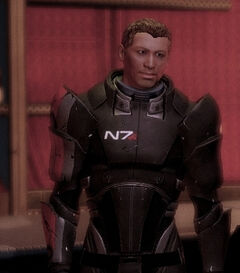 There is an asari outside the Eternity club that will tell you that there is a man causing trouble inside, providing you then the Illium: A Troublemaker assignment.

Go into Eternity and talk to him at the bar.

The person making trouble in Eternity is actually Conrad Verner, an obsessed fan trying to prove himself. An asari weapons merchant claiming to be an undercover cop told him that the bar was a front for red sand dealers and convinced him that she needed the deed to the bar in order to shut down their operation.

Note: This assignment is only available if you completed Citadel: The Fan in Mass Effect, through the use of either Charm or Intimidate, and imported that save file.

Speaking with Conrad reveals that he believes the bar is a front for distributing red sand and that he was given this erroneous information by the Gateway Personal Defense dealer. The bartender insists that her bar does not sell red sand-- nor does it matter because red sand is legal on Illium as long as the seller has a license. When confronted with this information, the dealer reveals that her motives were to get the deed of the bar in order to advance her business (she describes the bar as "prime real estate"). Shepard then has the option to use Charm or Intimidate if the player has a high enough Paragon or Renegade score, respectively.

Note: Telling Conrad to leave appears to still trigger the mission to talk to the "officer", but actually completes the assignment on the spot, leaving Shepard without the option of proceeding with the assignment as outlined below. Sometime later there will be a news report stating that Conrad Verner died in a somewhat comical way attempting to stop a pair of teenage bus surfers. 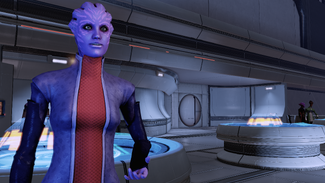 If the player chooses the Paragon option, they can play along with the dealer and persuade her to demand the deed herself (which gives Shepard a discount at the store), leading to her arrest, as the owner had surveillance and security present at the bar following Conrad's botched attempt. He will be confused by this, and ask Shepard what is going on, and at this point the player has several options: lie to him and say that the dealer was actually a deep cover operative belonging to a terrorist cell and Conrad helped a great deal by bringing this to Shepard's attention (Charm), tell him that he botched it (Intimidate), or simply tell the truth and reveal that the dealer lied to him.

On the other hand, if the player chooses the Renegade option, they can threaten the dealer and make her lie to Conrad, telling him that he helped take care of the red sand dealers, which also gives Shepard a discount at the store. Shepard can then tell Conrad that he did well and should stop, or the Commander can lie and say the operation was dangerous and Conrad could have been killed, in which case he apologizes for worrying Shepard.

If Shepard chooses to help him using either option, there is Galactic News report on the founding of Conrad's charity, "Shepards", which aims to help orphans, POWs and refugees.

Conrad will show up again in a mission provided that Shepard didn't tell Conrad to leave.

The situation with Conrad Verner and the lying weapons merchant has been resolved, and Conrad seems happy with the outcome.

Retrieved from "https://masseffect.fandom.com/wiki/Illium:_Conrad_Verner?oldid=516310"
Community content is available under CC-BY-SA unless otherwise noted.