Gianna Parasini, an old acquaintance from Noveria, left under mysterious circumstances with a reminder not to forget about a drink she had ordered.

Note: Gianna Parasini will appear only if a Mass Effect save file has been imported with her alive. Whether you helped her arrest Administrator Anoleis or not only affects the initial dialogue and will have no impact on the assignment.

Gianna will be sitting at a table on the Trading Floor on Illium, below the entrance to Liara's office. Gianna and Shepard briefly talk before Gianna excuses herself. As she leaves, Gianna reminds Shepard to drink the beer on the table. Gianna has left a note underneath the beer explaining that her true purpose on Illium is investigating an asari merchant, Hermia, for smuggling schematics from Noveria and asking for Shepard's help. 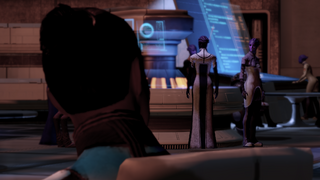 When talking to Gianna again, should a male Shepard assist her, she rewards him with a kiss, stating "Much better than an autograph".

Note: To get the kiss from Parasini, two conditions must be satisfied. Shepard must have helped Parasini on Noveria and you must choose the paragon farewell line ("It was good seeing you"), not the neutral farewell line.

In the alternative, Shepard can tell Hermia that Gianna is investigating her. Hermia will give Shepard a discount and then leave. This requires no Charm or Intimidate check and Shepard earns 5 more Renegade points as a result. The discount is the same as if Shepard negotiated lower prices through Charm or Intimidate, and the prices are not discounted further if Shepard has already done so. Gianna will feel betrayed by Shepard and will not converse further. The assignment will be considered complete, but no experience points will be awarded.

Retrieved from "https://masseffect.fandom.com/wiki/Illium:_Gianna_Parasini?oldid=500690"
Community content is available under CC-BY-SA unless otherwise noted.