Liara has requested help hacking systems on Illium to get her valuable data. After hacking a system, a vulnerable server node can be linked to Liara's machine.

This mission is acquired upon first landing on Illium. After conversation with Careena, you will receive a journal entry named Illium: Liara T'Soni. Visit Liara in her office, directly above the entrance to the trading floor, and talk to her. Ask her how she is, then when she mentions that she has things she "needs to take care of", ask if she needs help. This changes the mission's name to Illium: Liara: Systems Hacking. 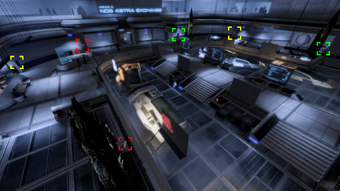 Three terminals need to be hacked. They are all located on the southern portion of the map, where the Taxi Stand, Memories of Illium, Gateway Personal Defense, Tracking Office, and Baria Frontiers are located. After a terminal is hacked, Shepard has 60 seconds to find the corresponding vulnerable system to upload the data to Liara.

Once a terminal is hacked, a number in the lower-right corner will indicate the distance from the vulnerable system. Once all three terminals are hacked, you will receive an experience reward plus 5 Renegade points, and Liara calls to tell Shepard to return to her office. Talking to Liara again completes the mission, awards 2000 credits, and unlocks the follow-up mission: Illium: Liara: The Observer.

The first terminal can be found near the Tracking Office, its corresponding system is located on the left of Baria Frontiers.

The second terminal is located near Gateway Personal Defense (close to Charr) and its corresponding system is just on the right of the Tracking Office.

The third terminal is between the area door and Gateway Personal Defense (next to two asari) and its corresponding system is located behind Memories of Illium.

Retrieved from "https://masseffect.fandom.com/wiki/Illium:_Liara:_Systems_Hacking?oldid=521833"
Community content is available under CC-BY-SA unless otherwise noted.