The colonists once controlled by the Thorian have been tricked into signing a nasty contract for intrusive medical scans. They need help renegotiating the terms of the contract.

A colonist from Zhu's Hope on Feros (either a green Shiala, if she was spared by Shepard in Mass Effect, or a human female colonist) is sitting by the Tracking Office on Illium. 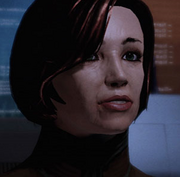 While walking past the Tracking Office, a colonist will stand up and approach you, recognising you from your mission on Feros two years previously. If you spared most of the colonists, the colony has recovered and grown but are now facing new troubles; if not (or if you did not import a Mass Effect character), then the colonists have returned to Earth. Either way, they have a problem requiring your attention. While signing a contract on Illium for treatment, the colonists have inadvertently given permission for Baria Frontiers to perform invasive, potentially harmful medical tests on them. She then asks you to negotiate with the Baria Frontiers representative to change the terms of the contract.

Talking to Erinya, the Baria Frontiers representative, reveals that she has a deeply rooted dislike of non-asari. Erinya blames the death of her bond partner and children on the actions of other species. If Shepard has enough Paragon or Renegade points, she can be persuaded to alter the contract, rewarding you with 40 experience.

If Shepard aids the colony, the Commander will receive the following message from Lizbeth Baynham once on the Normandy:

Conversely, if Shepard chose to kill all of the colonists on Zhu's Hope instead of using the nerve gas grenades, Lizbeth sends this alternative email:

The contract has been successfully negotiated, and the colonists of Feros will not be subjected to intrusive scans.

Retrieved from "https://masseffect.fandom.com/wiki/Illium:_Medical_Scans?oldid=505746"
Community content is available under CC-BY-SA unless otherwise noted.