Start a Wiki
Indoctrination is the term used for the "brainwashing" effect the Reapers and their technology have on organic beings. A signal or energy field surrounds the Reaper, which subtly influences the minds of any organic individual in range. It was first reported to Commander Shepard by farmers on Eden Prime, who claimed there was a "horrible noise" emanating from Sovereign as it descended. Matriarch Benezia said that even Sovereign's interior serves indoctrination: the strange angles of the rooms are confusing and make you uncertain of yourself. The effect seems to extend to Reaper artifacts, such as the one brought aboard the MSV Cornucopia that brainwashed her crew.

Indoctrination is one of the most insidious weapons the Reapers have in their arsenal; the salarian lieutenant Ganto Imness describes it as a greater threat than a krogan army. As Vigil explains, indoctrinated slaves from conquered planets were used during the last Reaper incursion as sleeper agents. They were taken in by other Protheans as refugees, then betrayed their own people to the machines. But the Reapers viewed them as disposable. When they disappeared back through the Citadel relay, the Reapers abandoned their indoctrinated slaves, leaving them to starve or die of exposure. 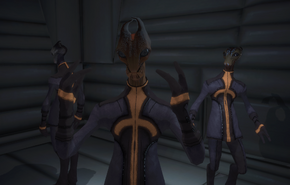 The precise mechanics of the indoctrination effect are poorly understood. It is believed that the Reapers generate an electromagnetic field, waves of infrasound and ultrasound, or both in order to stimulate areas of a victim's brain and limbic system. The resulting effect varies depending on the intent of the Reaper: the victim may suffer headaches and hallucinations, have feelings of "being watched" or paranoia, or come to view the Reaper itself with superstitious awe. Ultimately, the Reaper gains the ability to use the victim's body to amplify its signal, manifesting as voices within the victim's mind.

Rana Thanoptis, an asari neuroscientist on Virmire, goes into more detail. She describes indoctrination as a subtle whisper you can't ignore, that compels you to do things without knowing why. Over days, perhaps a week of exposure to Sovereign's signal, the subject stops thinking for themselves and just obeys, eventually becoming a mindless servant. That was the fate of Rana's predecessor, who became her first test subject, and the captured salarians who had once been Captain Kirrahe's men.

But as Saren Arterius discovered during his research into indoctrination at the facility, there is a balance between control and usefulness. The more control Sovereign has over a person, the less capable they become. Saren realized that to keep his mind free of Sovereign's control, he had to make himself an invaluable resource. He believed that Sovereign would allow him a reprieve from indoctrination, because the Reaper needed Saren's mind intact to find the Conduit.

The mental damage from indoctrination is severe and permanent. As Shepard saw, the captured salarians on Virmire had been turned into shambling husks, who either attacked on sight or just stood awaiting orders. Only people with immense mental strength are able to resist indoctrination, and even then, only for a short time. Matriarch Benezia used her abilities to keep a 'haven' in her mind free of indoctrination, hoping for a chance to use it, but this meant she was effectively trapped in her own mind, watching in horror as she committed atrocities on Saren's orders. When mortally injured on Noveria, a despairing Benezia refused Shepard's offer of help and chose to die, saying "I am not myself, I never will be again."

The last Rachni Queen was shown to be immune or at least highly resistant to indoctrination. When the Reapers captured her during their invasion of the galaxy, they forced her to breed an army of Rachni warriors for them. However, the Reapers were unable to control her, thus making it necessary to physically restrain her. The reasons for the Queen's resistance to indoctrination are unknown.

The only person who fully escaped indoctrination's grip was Shiala, but her case was unique; Sovereign's control was supplanted by the Thorian's when she was exchanged for the Cipher, which ended with the Thorian's demise—a scenario unlikely to be repeated.

Ironically, Sovereign's indoctrination may have led to its undoing. After the attack on Virmire, when Shepard told Saren he had been indoctrinated without realizing it, Saren's resolve began to falter and he started questioning what he was doing. To keep Saren loyal, Sovereign put cybernetic implants in Saren's body and used those implants to strengthen its control over the former Spectre. Saren found his loyalty to Sovereign's cause greatly strengthened, although he wasn't a brainless slave and could still be reasoned with. When Saren died, the Reaper took direct control over the implants and reanimated his corpse to fight Shepard. Because Sovereign was focusing a significant portion of energy to control Saren, the Reaper fell off balance by losing shields and became vulnerable with the destruction of its avatar. With its shields down, the Alliance Navy was able to destroy the Reaper. Despite this, the rest of the Reapers observed during the invasion don't seem to suffer from this flaw, prominently displayed when Harbinger assumes direct control of a Collector Drone during various confrontations with Shepard.

The control the Thorian exerts using spores is similar to indoctrination, though the initial conditioning is different. While Reaper indoctrination erodes the psyche until an individual ceases thinking for themselves, the Thorian's spores allow it to control its thralls using pain as reinforcement and punishment. If a victim refuses the Thorian's orders, the result is pain so severe that it quickly conditions the individual against considering rebellion; the removal of the pain when they comply serves as further reinforcement. This conditioning allows the Thorian almost complete control of those it enslaves, so that they will even die to protect it.

Thorian enthrallment also bestows upon its thralls an extrasensory awareness of others also enthralled, allowing them to act much more cohesively with each other; for example, 'acting as one' in combat. Reaper indoctrination has no such benefits to the individual.

The geth heretics, a splinter faction of the geth that worship the Reapers and comprised the bulk of Saren's army, were provided with a Reaper virus that subtly changed their low-level processes, which could be used to simulate indoctrination upon the geth that chose not to worship the Reapers. This also implies that synthetics are immune to conventional indoctrination, since the heretic geth sided with Sovereign willingly, and Sovereign did not pursue them further once the main geth collective rejected its offers.

After salvaging technology from the Collector Base, Cerberus used Reaper implants to indoctrinate captured civilians and transform them into loyal soldiers and test subjects. The Illusive Man believed that if they could replicate the Reaper indoctrination signal, they could use it in combination with the Crucible to seize control of the Reapers themselves. On the orders of the Illusive Man, Henry Lawson conducted secret experiments at the Sanctuary facility on Horizon, transforming unsuspecting refugees into Husks. Lawson was able to successfully replicate the Reapers' signal, which enabled him to control the newly created Husks. However, the Reapers learned of the experiments and attacked the Sanctuary facility. 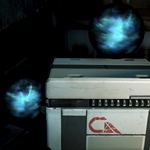 The Leviathans were able to exert control over organic species by directing faster-than-light pulses to their many organic, opalescent "artifacts" scattered throughout the galaxy. Through them, they were able to communicate, control organics, and observe the galaxy.

Unlike Reaper indoctrination, this method does not cause long-term mental damage aside from the enthralled individuals having no memory of the event; for example, the miners on Mahavid were enthralled for a period of ten years and did not realize any time had passed since their enthrallment began. However, the Leviathans were able to put Dr. Garret Bryson's assistant, Derek Hadley, in a vegetative state through their abilities.

The Leviathan confronted by Commander Shepard notes that this enthrallment was the basis for Reaper indoctrination.

Retrieved from "https://masseffect.fandom.com/wiki/Indoctrination?oldid=517117"
Community content is available under CC-BY-SA unless otherwise noted.