It is programmed to recognize anyone in the room as the Shadow Broker, and dutifully notifies the "Broker" of recent news from across the galaxy. Reports include selling the Broker's stock in copper the day before an expected crash in the market, acquiring the soul name of the hanar leader of their Enkindlers religion, the odd purchases recently made by the turian Councilor's mistress and how she might be moving to a larger mansion, and obtaining the video equipment used to capture the duel between General Partinax and Kihilix Tanus on Taetrus. 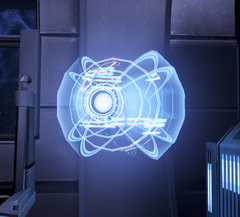 The old Shadow Broker's info drone is among the items Liara takes with her when Cerberus tracked her ship down on Hagalaz.

Over time, Liara starts calling the drone "Glyph", which she now does 95% of the time, according to the drone itself. After the Normandy SR-2's retrofit, Liara moves her equipment into Miranda Lawson's old quarters on Deck 3. Glyph is brought along, as it is still needed to coordinate the massive networks, and continues to assist Liara as the Shadow Broker from the room during the Reaper invasion.

Liara benefits greatly from Glyph's help and frequently consults it for coordinating her work. At one time, she orders Glyph to run safe mode diagnostics while the Normandy was suffering technical glitches during EDI's interfacing with the mech recovered from Mars. At another time, Glyph informs her about the self-inflicted destruction of the colony world of Tyvor to prevent it from being captured by the Reapers.

During one of the aftermission lulls, Liara asks Glyph about contacting Agent Detrace who was posted on Valchir. Glyph reports that contact was lost for eight hours. Liara tells it to allocate Agent Calamis to report Reaper activity past the Lowas relay.

In another one of the aftermission downtimes, Glyph informs Liara about five ex-Sonax industries scientists who are wanted by the Council for stealing Prothean tech from Garvug. Liara tells Glyph to extend the scientists an amnesty and send an invitation to work on the Crucible Project, sure that the Council will overlook their earlier transgressions.

After the destruction of the Reaper Destroyer by Kalros on Tuchanka, Glyph informs her about its dormant state and that krogan teams are on the way for a closer inspection. Realizing the dangers even a dead Reaper can pose, Liara tells it to forbid the krogan to approach it.

In the aftermath of the failed Cerberus takeover of the Citadel, Liara asks Glyph to send the latest report on the Council's bodyguards so that she may position one of her agents among them. When Glyph reports that positioning an agent in the Council staff would take at least a week, Liara understands the need for caution and discretion after the major incident of security breach and tells Glyph to postpone the deployments.

Sometime during the war, Liara incorporates Glyph into time capsules she has seeded on multiple planets in case they lose to the Reapers. Glyph will act as a guide providing a future cycle with information about the Reapers and the Crucible.

Should Shepard refuse to activate the Crucible, the Reapers eventually win the war and continue the cycle of annihilation. One of Liara's time capsules is seen on an unknown planet, and Glyph is seen providing a recording of Liara explaining the contents of the capsule.

Glyph accompanies Liara throughout Shepard's identity theft fiasco. It purchases tickets and make reservations to a fundraiser on the Silver Coast Casino that has a lead on Shepard's situation, and later reports activity at the Citadel Archives.

As Shepard brings the entire team out on a mission, Glyph follows into the archives as well. It gets repeatedly confused by Shepard's clone, as well as sidetracked by various historical information held in the archives, such as information on elcor mating rituals.

During fights, Liara instructs Glyph to lower the enemy's morale. It hovers over various targets and tells them statistical data on the likelihood of their survival, as well as various benefits that come with joining the Alliance military. Glyph later helps free Shepard and the squad when they are trapped and abandoned in iridium vaults by the clone and Maya Brooks.

Glyph helps Shepard organize a party in the aftermath of the clone incident. When the party gets going at the Personal Apartment, Glyph adds a bow-tie to its holographic avatar, and asks Shepard what mood to set for the party.

If Shepard set the ambience for a quiet party, Glyph can either help with food or drink preparation. It accompanies Samantha Traynor in either case. If a loud party is chosen instead, Glyph can either observe the guests dancing at the balcony or the people playing poker downstairs. Whichever way the party ends, it is used to take a photograph of the gang.

Retrieved from "https://masseffect.fandom.com/wiki/Info_Drone?oldid=517114"
Community content is available under CC-BY-SA unless otherwise noted.