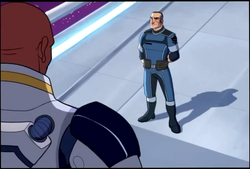 On the Citadel, you ran into Major Derek Izunami your old commanding officer. Izunami asked for your help in stopping a batarian terrorist attack against the Citadel. You accepted out of respect for your old friend.

Travel to Cartagena Station, deep in the Nemean Abyss, and meet your contact, Miranda Lawson.

After a short cinematic to introduce the plot, you will be able to discuss with your former CO, Derek Izunami. When you have accepted his offer you will have to travel to Cartagena Station. Once there you will meet and intercept a patrol in a hurry. You will then start a short discussion with their officer. He will warn Jacob that pirates have infiltrated the station and that all arrivals are not allowed to move until the threat is neutralized. Jacob will propose his help and the officer will indicate him a way to engage the pirates.

You will then engage the pirates in order to reach your contact, Miranda Lawson. Once the fight is launched you will face several pirates and Pirate Elite on four corridors before to reach the entrance of the bar called the Fringe where Miranda is waiting for you.

When you enter the Fringe, you will meet the pirate's leader, Clint "Black Eye" Darragh, and engage a discussion with him. You can either fight him or convince him to surrender to avoid a blood bath and the fifth combat zone. If you choose to fight, you will have to defeat him in the Fringe with his two bodyguards.

Once the pirate Black Eye is dead or captured, Miranda Lawson will call after you and start a dialogue. She will then explain three potential sources to investigate the terrorist threat. She have also hired a pilot corsair to facilitate Jacob's transportation. After the talk, you will enter the Galaxy map to choose among the three destinations pointed by Miranda. The order of the investigation is now up to you.

Retrieved from "https://masseffect.fandom.com/wiki/Into_the_Abyss?oldid=421069"
Community content is available under CC-BY-SA unless otherwise noted.