Irikah Krios was the wife of Thane Krios and the mother of Kolyat Krios. She was vividly remembered for her sunset-colored eyes.

Irikah was a lab researcher working on a vaccine for a rare hanar disease. Some parties had "moral objections" to her work, which resulted in thugs breaking in at her lab and attempting to destroy the place. It was then that Thane Krios physically intervened and helped her put down the intruders. She wasn't helpless herself as she personally dealt with one attacker.

Prior to this incident, Irikah prevented an assassination on an old salarian at a park by placing herself in the targeting laser's way. Irikah started calling for the lab's security reinforcements when she learned it was Thane at the trigger, but changed her mind when she heard Thane's plea for redemption.

Despite her skepticism and contempt, she showed him compassion. Eventually, she forgave him. They grew close enough to go out on dates and some misadventures together. Irikah learned about Thane's upbringing and suggested that he was free to choose his own future - an advice he heeded when he asked the hanar to release him from his Compact.

Irikah and Thane married in a small open-air ceremony. One day, she couldn't sleep and sensed her husband's restlessness. She decided to give Thane a coin belonging to her father, claiming that rubbing it brought her father peace of mind.

With Kolyat born to the family and Thane struggling to make ends meet, Irikah supported her husband's decision to freelance his assassin skills. One of Thane's jobs eventually brought down a gang of vengeful batarians on his family. Irikah sensed intruders closing in on her home, instructed Kolyat to hide, and armed herself with a knife. She never made it out alive.

Thane took to avenging her death and showed no remorse at hunting those complicit. He threw the coin she gave him into the sea after much introspection about his life. 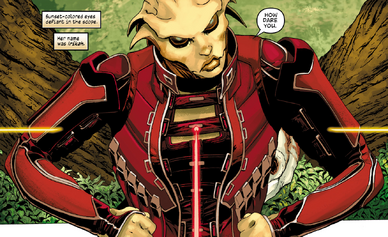 By 2185, Irikah's memory forms much of Thane's backstory, which may be shared with Commander Shepard in successive chats after the drell's recruitment on Illium.

Irikah met her husband during one of his assassination missions. She spotted the laser dot of Thane's weapon on his target and threw herself between them. She met his eyes through the scope of his weapon and his purpose faltered. Her action was so memorable that Thane made it his mission to meet her. She reminded him of Arashu, the goddess of motherhood and protection. When Thane finally met Irikah, he fell to his knees, apologized for his actions, and begged for her forgiveness.

She introduced Thane to the world outside of work, forgave Thane for his actions, and eventually loved him. After a period of time, Thane and Irikah married and Thane was allowed to leave the hanar's service in order to raise a family. Eventually, Thane and Irikah had a son, whom they named Kolyat.

Thane, however, knew only how to use his talents for destruction, so he freelanced as an assassin while he and Irikah were married. Thane tried his best to keep his work and personal life separate, but became complacent and, consequently, it caught up with him. He stayed away from his family too long and his enemies came for them. Thane had killed the leaders of a batarian slaver ring and their associates paid the Shadow Broker to learn who he was. They sent a hitman after his family because they were too afraid to go after Thane himself. He killed Irikah in the process.

Thane returned home to Kahje for Irikah's funeral, then after leaving Kolyat in the care of his aunts and uncles, he returned to his 'battle sleep' and hunted down the people who had murdered Irikah. Even though Thane was trained to take life quickly and efficiently, he tells Shepard that he let Irikah's murderers suffer before they died.