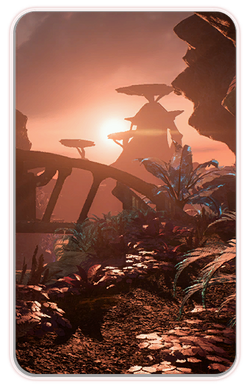 After a failed attack on Prodromos, the situation with the Roekaar and their leader, Akksul, has escalated. Jaal worries about future relations between his people and the Milky Way Species [sic] as more angara join this xenophobic cause.

When acquiring this loyalty mission, the final part of the Friend or Foe? trilogy and the start of this mission overlap each other.

Acknowledge the email to get the next objective.

Speak to Jaal on the Tempest Edit

When the Pathfinder enters Jaal's quarters, Ryder overhears part of a conversation between Jaal, Jassana, and Feladyr, two of his mothers. Three of Jaal's brothers and sisters have joined the Roekaar. Akksul has moved his headquarters to the Forge on Havarl, which is thought to be the birthplace of angaran civilization. Jaal requests Ryder's assistance to bring his relatives out of the Roekaar; he hopes that Ryder will be able to show his brothers and sister that not all aliens need to be feared and hated. Jaal has a contact on Havarl who will take them to the Roekaar.

Jaal's contact, Avka, is on the shuttle platform in Pelaav Research Station on Havarl, next to the merchant Cody Holdren. Jaal will already be here if he isn't in the active party.

Avka tells you that the Resistance has no intel on the Forge except that Akksul is in control of the site, and there has been no traffic in or out since then. The Resistance is willing to fly Jaal and Ryder to the Forge, but the Resistance doesn't want open conflict with the Roekaar and will offer no other support.

Board the Shuttle Edit

Speak to the Shuttle Pilot to begin the mission. You can change Loadout if desired. Jaal is a mandatory squadmate for this mission. Note: During loyalty missions, manual saving is disabled for the duration of the mission.

The shuttle then takes off for the Forge.

After landing, Jaal explains that the Moshae brings her disciples to the Forge, so Jaal is familiar with the place.

and the next objective will start.

The first area of the Forge is the govataan - a welcome center. It's deserted. That's strange because it's usually filled with people.

You can either investigate the buildings or bypass them and head for the door to the rest of the Forge site, which has a navpoint on it.

Building On The Left (You can scan a Security Terminal on the wall in the building) - There are two lootable containers, a datapad, and a terminal in this building.

There is no email for Log Onto Network entry. Reading this entry starts a small conversation with Jaal. Ryder wants to know about re-establishing comms and Jaal says to not do that so that the Roekaar won't be alerted.

Building On The Right (You can scan Blood Spatter on the floor) - There is a terminal in this room, a lootable container, and an Unknown Plants can be scanned for +10

There is no email for PLAY: Audio Log entry. Reading this entry starts an audio log about an Archeologist's sympathetic thoughts about Akksul.

Second Building On The Right (You can scan Lab Equipment in the room) - There is a terminal in this room and two lootable containers.

There is no email for PLAY: Audio Log entry. Reading this entry starts an audio log about a Roekaar bringing a slice of elmohk to an Archeologist at the Forge but not speaking to them.

Building In The Center To The Left (You can scan Containment Cells on the floor) - There is a terminal in this room and two lootable containers.

There is no email for PLAY: Audio Log entry. Reading this entry starts an audio log about an Archeologist's skeptical thoughts about Akksul.

Building In The Center To The Right (You can scan an Angaran Relic on the floor) - There is a datapad in this room, a lootable container, the Angaran Relic can be scanned for +10

, and the Nutrient Paste can be scanned for +10

Investigating all of the buildings will reveal minor loot, datapads, consoles with audio logs, and remarks from Jaal. Piecing together the data reveals that the Roekaar were invited in to support the scientists at the Forge, only to seize control of the facility in a bloodless coup, declaring their intent to defend angaran culture.

As you approach the navpoint exit door, repeating propaganda broadcasts from Akksul can be overheard. Opening the door starts a cutscene that reveals two Roekaar, who are surprised to see Jaal, and even more surprised to see Ryder.

After killing the Roekaar, there is a datapad in the room that can be read for additional details.

The next door leads into a courtyard. Several Roekaar have a good tactical position here, on top of a small cliff and on the buildings behind. More will arrive by shuttle shortly, but all of the Roekaar are simple grunts except for one Sharpshooter, and powers should make short work of them.

in the center of the area.

, and a lootable container.

Upper Right Building - There are three lootable containers in this room.

Outside of the Upper Right Building is a datapad on a crate.

Left Building - There is a terminal in this room and two lootable containers.

There is no email for PLAY: Audio Log entry. Reading this entry starts an audio log from an Archeologist about having to leave the Forge. A few resisted leaving and were forced to leave by violence.

As before, the buildings in this area contain loot, some conversations with Jaal, terminals, and datapads. An audio log reveals the fate of the missing scientists; the Roekaar moved them out of the Forge by force, claiming that it was for their own protection. Where they went is not made clear.

Return power to the Door Edit

A door up the hill and to the south leads out of the govataan. The door has no power, but a quick scan reveals a nearby generator.

Activate the generator and return to the now powered door. opening the door leads to a small room and another door. Head through the second door.

Past the door the path leads to a bridge over a ravine, which the Roekaar immediately blow up. Head to the navpoint at the now destroyed bridge.

Climb Past the Roekaar Edit

The jump put the squad at the bottom of a hill, with Roekaar dug in at the top and more arriving by shuttle. There is good cover on the left side while ascending, and a cautious advance should not be too difficult. Defeat the Roekaar forces.

After a conversation on an upper ledge where Jaal and the other squadmate admire the view, scan three nearby Angaran Ruins for +10

. There are three lootable containers and a datapad on a crate.

Jump up the ledge to the navpoint and a cutscene starts.

You will be fired upon by Roekaar defending the "nest." Fortunately, the checkpoint turns out to be manned by Jaal's brothers Baranjj and Lathoul, and their sister Teviint.

Baranjj and Teviint aren't interested in cooperation with the new Milky Way aliens, but Lathoul reveals that Akksul is planning to blow up the Forge with bombs stolen from the Initiative, and frame the Initiative as enemies of the angara. Teviint, furious with this, shoots Lathoul in the back. Horrified by her own actions, she runs off with Baranjj. Lathoul tells Ryder that he's not too badly injured, and that Ryder must stop the bombs from detonating.

Follow the navpoint down the passage leads to the area with the bombs and several Roekaar.

The following objectives aren't added until Ryder engages the Roekaar. Note: Shooting at a long distance with a sniper rifle will start the timer and objectives.

A three minute timer starts for the bombs' detonation and more Roekaar will arrive by shuttle in a minute. You will have to disarm all four bombs, while shooting is going on all over the place. If you have Tactical Cloak, this can be used to help with disarming the bombs. Using the cloak while running between the bombs reduces the difficulty of the fight against the Roekaar and the timer.

After neutralizing the bomb threats, eliminate the remaining Roekaar and the reinforcements.

When the fight is over, Teviint comes running very sorry for, as she believes, killing her brother. She's relieved to discover that she did not, and just wants to go home.

When Akksul is calling Jaal a traitor and is preparing to shoot him, you are given an Interrupt option to shoot Akksul first. Doing this will make Akksul a martyr and strengthen the Roekaar's cause. Letting Akksul take the shot will reveal that his aim is poor - at point blank range. Akksul will lose support from his followers by showing how deep he has fallen.

The squad then returns to the angaran camp in Havarl and there is a family reunion.

Whether you shot Akksul or not Jaal will tell you what he thinks of about what happened.

If Ryder killed Akksul:
Jaal will be upset with you for a time, and will refuse to talk to you on the Tempest until the next Priority Ops mission.

However, you receive the following email:

If Ryder let Akksul survive:
You will receive this email:

There are several minor dialogue changes about the status of the Roekaar later in the game, but there don't seem to be any substantive effects on choosing to kill Akksul or not.

Retrieved from "https://masseffect.fandom.com/wiki/Jaal_Ama_Darav:_Flesh_and_Blood?oldid=517189"
Community content is available under CC-BY-SA unless otherwise noted.