“War is our sculptor. And we are prisoners to its design.”

Javik is a surviving member of the Prothean race and squadmate who appears in Mass Effect 3's From Ashes DLC. He has been in stasis for over 50,000 years.

Javik is voiced by Ike Amadi. He is the only Mass Effect character to have a deep African voice and this is considered to be controversial by some.

In the Prothean society, there were many "Avatars," Protheans who embodied a single virtue for the society. Javik is one of those Avatars, and his virtue is Vengeance.

According to Javik, he was the last of the warriors of the Prothean Empire, born in the midst of the war with the Reapers — a war the Protheans were losing. The Citadel had already fallen long before he was born, and his first memories were seeing his planet in flames during a Reaper assault.

Javik was to be the leader of hundreds of thousands of strong warriors to survive the cull via stasis in underground bunkers on Eden Prime. His mission was simple: outlast the invasion in stasis, and once he was awoken, lead the other warriors in a campaign to reclaim the galaxy. Unfortunately, indoctrinated traitors in their ranks fouled that plan - in the end, the supervising VI Victory was forced to initiate a neutron purge to clear out the Reaper forces as Javik took cover in a stasis pod; it is implied that Victory had to draw power from an unknown number of pods to do so. Unfortunately, damage to the bunker made it impossible for the survivors to awaken from stasis on their own. Therefore, Victory allowed his stasis pod to have priority in power distribution until a new culture discovers him. 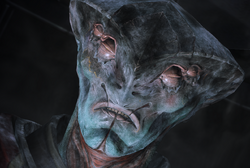 50,000 years later, in 2186 CE, Javik's pod is uncovered and opened by Commander Shepard and Liara T'Soni, who were investigating Cerberus activity on Eden Prime. Javik reacts with a biotic attack against his rescuers as he stumbled out of the pod. He then looked up with shock at the human settlements, lush fields, and the ruins of the Prothean structures. Shepard then touched him, causing the Commander to experience Javik's recent memories while he in turn was quickly able to understand human language with his sensory ability. He agrees to join Shepard in destroying the Reapers, vowing he will not rest until the last Reaper is dead. However, Javik did not hide his surprise that "primitive" races the Protheans once studied were now the dominant galactic power, nor could he provide insight into the Prothean device dubbed Crucible and the final piece called the Catalyst.

Upon arriving on the Citadel for the first time, Javik is amazed at the scale of the station. He is approached by a curious hanar, who overhears him and identifies him as Prothean. A nearby asari and turian also approach, asking Javik what hope can there be for the present cycle if the Reapers managed to destroy his civilization. Javik attempts an answer with blunt honesty but Shepard can interrupt him to say otherwise.

If brought to Thessia, Javik reveals that the Protheans were responsible for much of early asari development. Liara is very upset, and gets in a confrontation with him back on the Normandy. Shepard can stop Liara from attacking him with a biotic field, or just let her stop and walk away on her own, saying he isn't worth it.

After witnessing the extent of Henry Lawson's experiments on Horizon, Javik isn't surprised. He relates to Shepard how one species in the Prothean Empire tried sacrificing their own children to appease the Reapers; it only made their extinction much easier. 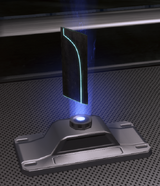 Later on, if Shepard talks to him in his quarters, the Commander can persuade him to use his Prothean memory shard, which starts off mildly and quickly takes him back to more traumatic events. Afterwards, he talks about how he himself commanded a strong and loyal crew until they were indoctrinated and turned on him. Eventually, Javik tracked down his crew and slit their throats, watching them bleed to death to be certain. While in London, he tells Shepard that if he survives, he wishes to return to the place that his comrades died so that he may take his own life and join them. However, if Javik did not touch the shard, he tells Shepard that he is looking forward to see how peace would be like, having only known war all his life.

If Shepard has Javik in the squad for the final mission on Earth, he can be killed in a push to the Conduit if the final Effective Military Strength is too low.

Retrieved from "https://masseffect.fandom.com/wiki/Javik?oldid=316925"
Community content is available under CC-BY-SA unless otherwise noted.