Jien Garson[2] is an eccentric human billionaire responsible for spearheading the Andromeda Initiative beginning in 2176. Garson leads the expedition from the Nexus, and is in charge of briefing Initiative recruits on the mission-critical information they will be using once they arrive in the Andromeda Galaxy: Arks and Nexus overviews, ground and space vehicle certifications, outpost establishment guidelines, first contact protocols, and even weapons/biotics/survival training for people accepted in the Pathfinder team.

As the Andromeda Initiative began preparing for departure, Jien Garson's office on Earth was harried by a group of aggressive protesters demanding a place on the arks. The mob turned violent as they assaulted a turian trying to get past them, before Garson's head of security, Luna Shanks, used her biotics to force the crowd to flee.

The turian, introducing himself as Sanjin Vinnick, then asked Shanks if he could join the Initiative. Though Shanks refused him, Garson overheard he has specific skills she needed and requested to see Vinnick personally. Having preread Vinnick's military record while the pair were ascending the elevator, Garson told the turian that he needed to help her find a quarian scientist named Shio'Leth vas Novarra, who had found a way to calculate the Initiative's course to Andromeda. However, Shio had gone missing and Garson's people had recently discovered a tiny flaw in his calculations. Garson wanted Shio found before the Initiative's launch date, and thus sent Shanks and Vinnick to the Citadel.

Garson figured in the story of how Shanks came to be under her employ. The billionaire came to Shanks' father for a huge construction bid, though the negotiations fell through. However, she noticed Shanks' talent in the field while she was inspecting her father's holdings. Garson saw the biotic's potential and hired Shanks on the spot, to the chagrin of her father.

Garson's knack for trusting the right people was initially thought to be fallible by Shanks, though Vinnick, who came clean as Tiran Kandros, began wavering in his purpose of infiltrating the Initiative, and mused Garson may still be right in trusting him. 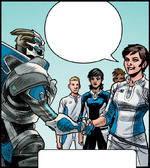 Back in her office Garson received updates on the mission: a wounded Shanks returned to Earth and was in stable condition. Tiran and Shio had also been incommunicado since leaving Omega. Everything hinged on Shio's data being corrected, and Garson worried the Initiative was finished if he didn't come back.

Ultimately, Tiran returned with Shio and the proper data to the Initiative. Garson personally welcomed Tiran to the Initiative and promised to repay the debt they now owed him, no matter how difficult.

During the terrorist bombing and subsequent conflagration on the Hyperion, Garson contacted Cora Harper and provided her with navpoints to an infirmary. There, she manifested through holoprojectors and explained to the biotic why she's there. Garson liked to keep a close watch on her investments and wanted surveillance known only to a few, so in case of certain events she's alerted and can choose to project her presence. She paid for the holoprojectors herself, which were installed in most locations.

Garson did not appear overly concerned that SAM was almost destroyed, though she hinted to Cora unseen motivations were at play. It didn't matter who perpetrated the bombing, for they were all just pawns in something even the billionaire answered to. She admitted that the Initiative was allowed to develop artificial intelligence, but certain forces wanted that technology available in the Milky Way even with the explicit laws against it. Despite Cora's accusations, however, she wasn't responsible for the theft of Alec Ryder's AI kernel, only alluding to someone or something more powerful than her pulling the strings. She told Cora AI was the price of their journey to Andromeda.

Cora was waffling in her commitment to the Initiative in light of what she just heard. Garson allowed her the chance to back out, though she challenged her to change the future in Andromeda if she stayed. She hoped to meet Cora in person someday, logging off before the arrival of the rescue ship.

Garson and other senior members of the Initiative awoke from cryo prior to the Nexus' arrival in the Heleus Cluster in 2818. She soon went missing when the Nexus hit the Scourge, killing most of the senior leadership, and thus was put on the high priority by Security Director Sloane Kelly. Eventually, they found Garson's body in one of the apartments, in which it was assumed she was a casualty of the Scourge. Jarun Tann was selected to be the new Director, being eighth in the line of succession.

If Pathfinder Ryder chooses to unlock Alec Ryder's memories, Ryder learns that the Initiative was supported by an anonymous benefactor. They can speak with Tann about this, at which point the salarian suggests not investigating any further, lest it cause panic. Ryder then checks the security logs and finds that the Initiative wrote off Garson's death as a Scourge casualty and investigates the apartment she was found in. Ryder's scanner discovers evidence that an unidentified individual was in the apartment at the same time as Garson, indicating that she was murdered. Ryder further questions what Garson was even doing in a shuttered apartment and discovers a secret room with an audio log revealing that Garson was attempting to hide from her murderer and that her VI in the Cultural Center could be accessed with the password "Fulcrum" − a codeword that Alec Ryder and Jien used to secretly discuss the benefactor.

The Garson VI reveals to Ryder that she did indeed have an anonymous benefactor, whom she regrets association with, as she questioned their motives in supporting the Initiative.