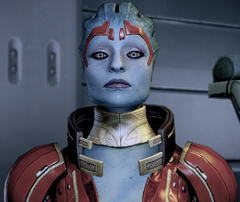 A justicar is an asari who has forsworn having children and family and given up all worldly possessions aside from weapons and armor. After swearing themselves to the Code of the Justicars, they wander asari space righting wrongs, as defined by their unwavering code of justice. Samara compares the code and duties of the justicar to that of the knights-errant in Medieval Christendom, or the Japanese samurai. There are very few asari justicars due to the high mortality rates in training, and the fact that the life of a justicar is seldom easy.

The Justicar Code is the central force in every justicar's life. The Code is composed of more than five thousand sutras that describe every possible situation a justicar may encounter. Every justicar is required to know the entire Code by heart. Samara comments that living by the Code makes her choices simple: "if I follow the Code, I am just. If I do not, I am unjust." In compliance with the Justicar Code, there are no morally grey actions: every deed done falls clearly into right or wrong categories. Thus a justicar will defend a village of just farmers to her dying breath if they are being attacked by bandits, but she will kill every person in that village if they are found to be running a smuggling cartel. Samara herself admits that, due to the harsh nature of the Code, curiosity is a liability for a justicar: if she is required to kill a murderer, she does not wish to know anything that could potentially redeem him in her eyes.

Justicars swear oaths called the Oaths of Subsumation. These pledge protection of the innocent, the punishment of the guilty, and defence of common law and the norms of asari society. This means justicars will never overthrow an existing government, and will instead preserve the existing laws of the asari without the risk of staging a coup should the government be judged unjust.

A specific oath, the Third Oath of Subsumation, binds absolute loyalty to the target of the pledge. This overrides the dictates of even the Justicar Code; upon release from the oath justicars may kill the ones they previously swore allegiance to if they were forced to do extremely dishonorable things.

Given their personal sacrifices, skill and rigid adherence to their Code, justicars are highly revered in asari culture, and there are many stories and vids made of their adventures, although much of it is exaggerated. 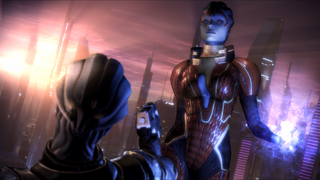 While they often find a justicar's presence unnerving, asari police forces usually let a justicar perform her duties out of respect. However, should the police feel the justicar is being unreasonable, the Code allows the justicar to go into their custody for a single day. After that day the justicar is bound by the Code to continue her duties, which may lead to violence between the justicar and her captors.

It is unknown whether the Code has prescriptions for ritual suicide, should a Justicar be unable to fulfill her duties. While Justicar Samara does attempt to commit suicide when unable to reconcile her obligations to the Code with her love of her children, this does not necessarily indicate that she is compelled to do so by the Code.

Justicars can opt to leave the order. Examples of such people include Tristana and the Asari Duelist.

During the Reaper invasion, some justicars returned to Thessia to reinforce their homeworld's defense. It is estimated that if the Reapers are defeated, the justicar order may no longer exist due to their limited numbers.