Mass Effect
Mass Effect 3
Ka'hairal Balak is the leader of a batarian terrorist group that raids Asteroid X57 in 2183. Unlike the other batarians, who only planned to make a quick slave grab, Balak is on a mission to crash Asteroid X57 into the human colony of Terra Nova.

Balak hates humans because they claimed territory and resources that he believes should have belonged to the batarians during the early stages of humanity's major expansion into the Skyllian Verge. He sees his actions as reprisal for the Skyllian Blitz on Elysium.

Balak rigged the fusion torches propelling the asteroid to execute burns that put it in a collision course with Terra Nova. After Shepard lands in the Mako and begins on shutting down the fusion torches, Balak sends his forces after the Commander. Balak then hunts for the hiding engineers in the main facility who were aiding Shepard. When he finds Kate Bowman, he demands to know who is attacking his people; when Kate refuses to answer, Balak kills her brother and sends Charn to find Shepard.

When the Commander launches an assault on the main facility, Shepard confronts Balak, who has planted a bomb in the offices where the hostages are being held. Balak talks angrily about the thwarted Skyllian Blitz (if Shepard is a War Hero, Balak holds Shepard personally responsible for the Blitz's failure) and about Torfan (if Shepard is Ruthless, Balak accuses Shepard of murdering batarians).

Shepard has a choice to make: either attack Balak to ensure his death, or release him in order to save the hostages, including Kate Bowman.

Balak detonates the bomb if Shepard chooses to attack him, killing the hostages, though he soon falls under the Commander's assault. Cornered, he taunts Shepard about the similarity of their actions, rhetorically asking the Commander "who's the real terrorist" now. Shepard can first fire a warning shot, graze him, then seriously wound him, or alternatively just verbally spar with him, but that doesn't stop Balak from spouting batarian jingoism, unless Shepard kills him outright.

Judging by Balak's reaction when Shepard asks him who is in charge of the batarians' terrorist actions, it is likely that Balak, as well as other batarian terrorist groups, answer to a higher authority. Balak's fate hinges on Shepard's decisions: he's executed after Shepard learns everything there is to learn from him, he's left to die there and then, or he's dropped off on Terra Nova to be handed over to the Alliance.

If Shepard chose to save the hostages, it is mentioned in a Galactic News announcement that Balak is still on the run and has not been arrested for his attack on X57.

If Shepard chose to kill or arrest Balak, a Galactic News announcement will inform that "Reverend Bowman, whose daughter Kate died in the batarian attack on Terra Nova, will be holding a non-denominational ceremony." 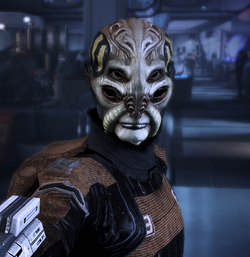 If Shepard chose to save the hostages, left Balak for dead without finishing him, turned him in to the authorities or did not undertake the mission to save Terra Nova, Shepard will meet Balak on the Citadel's holding docks.

Balak introduces himself as Captain Ka'hairal Balak of the Batarian External Forces if Shepard never met him before. (If Shepard had executed Balak, Balak's last known rank will have been Commander.)

After the events at Terra Nova, Balak went back to his homeworld while the Hegemony sent teams of scientists to study the Leviathan of Dis. The Leviathan turned out to be an inactive Reaper and the entire batarian science team was subsequently indoctrinated. These scientists served as sleeper agents in the conquest of Khar'shan and the destruction of the Batarian Hegemony by disabling a number of defense grids on Khar'shan and causing allied ships to fire on one another. Balak managed to escape to the Citadel and aided the remains of the batarian fleet against the Reapers by hacking Council transmissions. Balak claims he is the highest ranking military officer left in the Hegemony. Thus, he holds Shepard responsible for the destruction of his culture.

Shepard can either kill him or convince him to lend his support against the Reapers.

Retrieved from "https://masseffect.fandom.com/wiki/Ka%27hairal_Balak?oldid=445559"
Community content is available under CC-BY-SA unless otherwise noted.