A mountainous world originally settled by the angara, Kadara is now a haven for Nexus exiles and pirates. In addition to this criminal element, the planet is plagued by toxic water caused by an atypical amount of sulfide minerals.

A mountainous world originally settled by the angara, Kadara is a haven for Nexus exiles and pirates. With its water now drinkable, Kadara is also home to an Initiative outpost, Ditaeon. (Founded by Pathfinder Ryder; Mayor Christmas Tate elected.) 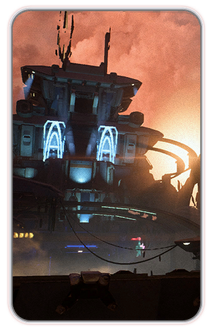 Kadara was of great interest to the Andromeda Initiative after it appeared on long-range surveys. Seemingly abundant liquid water and an oxygen-mix atmosphere made it a strong candidate for settlement, earning it the designation Habitat 4. Closer range surveys now reveal that Kadara's water sources are tainted and unpotable.

Of greater concern is the large settlement known as Kadara Port. Reportedly once a trade port for the angara, it has been adopted by exiles, pirates, and mercenaries who use it as a staging ground. Kadara Port is considered a rogue state by the Nexus, given its strong ties to the Exiles, and Initative personnel are advised to keep their distance.

APEX reports that Kadara Port is currently contested by two factions: the pirate Outcasts, led by former Nexus security official Sloane Kelly, and a more mysterious group of spies and smugglers broadly known as the Collective.

Sloane Kelly, leader of the pirate Outcasts, has now cemented her hold on Kadara Port and pledged to defend any outposts on Kadara from other exile factions. Officially, the Nexus still has no diplomatic ties with Kelly; unofficially, the APEX bounty on Kelly has been quietly withdrawn.

Kadara Port is now controlled by the Collective, led by "the Charlatan" Reyes Vidal. The Nexus is considering its response to these events, as Vidal is an unknown factor to the Initiative's leadership.

Ditaeon, the Initiative outpost on Kadara, has had a smooth initial deployment. The outpost is led by Christmas Tate, formerly of Mining Company 07 on Mars.

Sampling shows that activating Kadara's vault has dramatically improved water quality. New algal blooms and microbial life have emerged, which eat and metabolize sulfide minerals in the ground water before serving as food supply for larger animals. Ditaeon should not require more than standard water trading.


ANALYSIS:
This Remnant Architect's programming directives have been interrupted. It is in an orbital standby mode and remains tethered to its home planet Kadara. The Architect's armor suggests multiple self-repairs due to sulphuric acid exposure. Signal patterns indicate it is somehow monitoring Kadara's groundwater. 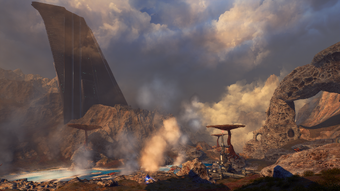 Kadara is polluted with corrosive substances due to toxic levels of sulfides prior to activation of the planet's vault. Pools of water will cause TOXIC ENVIRONMENT damage and pose an environmental hazard to personnel and vehicles.