Kaetus is Sloane Kelly's "right-hand turian" among the Outcasts. He helps keep the operation running smoothly.

Kaetus and Sloane are known to be close but neither are forthcoming as to the exact nature of their relationship. He claims he met Sloane on the Citadel: when he offered to buy her a drink she punched him in the face. However, he quickly brushes this off as sarcasm.

Kaetus went to Andromeda aboard Natanus and was able to join Sloane and her Outcasts following the ark's encounters with the Scourge.

Nakmor Kesh briefly thought about the rumors on Kaetus and Sloane's relationship, but ultimately it didn't concern her as she was more on learning whether Sloane was familiar enough with turians to place her trust in the turian life support engineer Calix Corvannis.

Kaetus once taught Sloane that turians learned to process loss like factors in one's life, and every victory was achieved on the back of those who didn't make it. She recalled the lesson after observing Calix's reactions to the death of one of his crew. 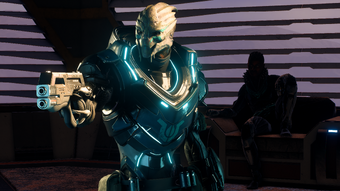 Pathfinder Ryder first encounters Kaetus standing beside Sloane during their request for a meeting with Vehn Terev. If Ryder takes a rude approach, Kaetus pulls a Carnifex on the Pathfinder as per a hand signal from Sloane. Ryder either disarms him, or he continues pointing the gun as the Pathfinder backs away from the Outcast Headquarters' throne room. If Ryder takes a more diplomatic approach, Kaetus walks them to the door and may even relay orders to other Outcasts allowing Ryder's meeting. In their first conversation afterward, Kaetus finds Ryder unusual in that they're able to refuse Sloane, or able to stay in her good graces from the outset.

If Ryder shares encountering turians on Havarl, Kaetus surmises Avitus Rix did a good job keeping the survivors alive. He knows the former Spectre's capabilities as they've crossed paths before. If pressed for the Outcast response on the Collective, Kaetus declines to discuss such things with strangers.

Kaetus can be overheard chiding a recruit for coming up short on fee collections. He doesn't want to hear excuses as the Outcasts aren't running a charity: people have to pay if they want continued protection.

In Kadara Slums, Kaetus can be heard on an Outcast guard's comms explaining how to deal with the Pathfinder. The guard reports someone suspicious running around in high-grade armor, and Kaetus tells him though the Pathfinder isn't presently a threat the guard should still keep watch nonetheless.

Kaetus notifies Ryder of possible kett stragglers from Kadara Port. The Outcasts executed a lot of kett when they seized the port, but Kaetus reckons there are still a few out in the badlands as he's received rumors of ambushes and disappearances attributed to the kett. He doesn't want to send his own personnel to deal with it as that might taint the perception of Sloane keeping Kadara kett-free, so he wants someone independent to do it like the Pathfinder.

When the last kett holdout has been located, Kaetus accompanies Sloane and Ryder in the mop-up operation. He dislikes Sloane's absence from the port as that gives the Collective opportunities to do something.

Kaetus is incapacitated by Outcast traitors subverted by the Charlatan. If Sloane was killed in the ensuing confrontation with the Charlatan, Kaetus is thrown into jail. According to Keema Dohrgun, the Charlatan intends to pump him for information before executing him. According to the Charlatan himself, he still hopes he can turn Kaetus into an asset though the turian's stubbornness is an issue.

In his holding cell, Kaetus regrets Sloane not killing the Pathfinder on their first meeting. He doesn't want to hear apologies, and he knows the "duel" with the Charlatan is a sham as the sniper who shot her rubbed it in his face. If Sloane went to war with the Initiative he would've supported it in light of what he now knows. He swears vengeance on Ryder for doing nothing if he ever manages to escape before the Charlatan kills him.

Retrieved from "https://masseffect.fandom.com/wiki/Kaetus?oldid=525031"
Community content is available under CC-BY-SA unless otherwise noted.