Start a Wiki
watch 01:50
The Loop (Games)
Do you like this video?
“The geth might get me, but I'm not gonna die from an infection in the middle of a battle. That's just insulting!”

Kal'Reegar is a quarian marine voiced by Adam Baldwin. 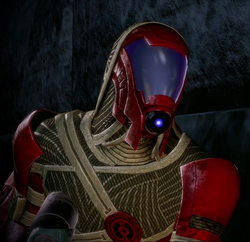 Kal'Reegar is a marine of the quarian Migrant Fleet that Commander Shepard meets on the former quarian colony of Haestrom in the Far Rim. He was part of a squad of Migrant Fleet Marines assigned to protect Tali'Zorah vas Neema, who was on the planet doing research on the system's sun. After arrival on Haestrom, the quarians were attacked by geth, who proceeded to slaughter most of the expedition save for Reegar and Tali. When Shepard encounters him, he is holed up on one side of a bridge, taking potshots with an ML-77 Missile Launcher at a geth platoon attempting to gain access to the observatory Tali is working in. The platoon includes a Geth Colossus, which is giving Reegar trouble, his suit is punctured and he is injured. Nonetheless Reegar is reluctant to do anything but fight and jokingly takes offense if Shepard points out the tear in his bio-suit. With Reegar's help (though the player can instruct him to stay down via a Paragon Interrupt), the geth platoon is taken down and Tali is rescued. After you enter the room with Tali and talk to her (and if Reegar has survived the battle), Reegar will come in and say he's injured and has already called for a pick-up.

However, Tali informs him that she will not be returning to the flotilla but will join Shepard on the Normandy instead. Before they part ways, Tali gives Kal the data she obtained about the planet's sun so he can give it to the Admiralty Board.

Should Commander Shepard take too much time during the battle with the Geth Colossus, Kal'Reegar will die.

There's a squad re-spawn glitch in the segment where the player fights the Geth Colossus. If you decided to not let Kal participate in the fighting (the Paragon path), then when either one or both your squad members are down, walk up and speak to Kal, and still do not allow him to participate. Immediately after the conversation both your squad members will be re-spawn with full health and shields (so will the player). This glitch can be repeated as many times as needed before the Colossus is defeated. Enemies will not re-spawn, giving the player an advantage.

On the Normandy, Shepard can ask Tali about Kal's condition and she reveals that he survived his injuries with just a minor infection and is no worse for the wear.

Commander Shepard can meet Kal again if they undertake Tali's loyalty mission and travel to the flotilla. During Tali's trial for treason, Reegar is one of the few quarians in the fleet who holds Tali in high regard and disbelieves the allegations against her. Furthermore he can be brought on as a witness during the trial to speak on behalf of Tali's character. Commander Shepard can also ask Reegar about his opinions as to what the quarians should do about reestablishing a homeworld. Kal notes that while he believes that a war against the geth to reclaim their homeworlds would be futile, and ultimately harmful to the Migrant Fleet, he would never shy away from a fight or his military duties.

Despite his repeated claims to be a mere point-and-shoot man, Reegar proves himself to be quite intelligent. His experience in the field has given him a decent tactical knowledge of both small-scale skirmishes and large scale wars. This shows during the dialogue scene, where he can give Shepard some good advice on both the Geth Colossus and the layout of the battlefield. He quickly picks up on the political mechanisms behind Tali's trial and seems to be highly respected, as both Admiral Raan and Gerrel asked for his opinion regarding Tali's trial and agreed with his recommendation to let Tali take back the Alarei to win popular support for her case, showing a decent grip of politics. Also, If Shepard does not reveal Tali's evidence, he will correctly guess that Tali found evidence she was unwilling to show.

Retrieved from "https://masseffect.fandom.com/wiki/Kal%27Reegar?oldid=140134"
Community content is available under CC-BY-SA unless otherwise noted.