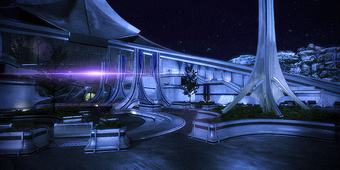 Asari commandos went missing while answering a distress call sent from an Ardat-Yakshi monastery. Investigate the monastery, and destroy it if necessary.

After the debrief with Anderson and Admiral Hackett in the comm room, Liara approaches Shepard with the news that Asari High Command was insistent on passing along a distress signal. Several asari commando squads have disappeared while investigating the signal. Although she says that the asari have not asked directly, the implicit message is that Shepard should help them. Your journal will be updated with the mission "Mesana: Distress Signal," but neither the journal nor Liara will have any helpful information.

Note: Though the mission's name suggests you should go to the Kallini system of the Nimbus Cluster, the monastery is actually in the Mesana system (Nimbus Cluster) on the planet Lesuss.

This mission, discounting alternative ways of progressing through the game, introduces another Reaper perversion into their arsenal of troops.

Most enemies here only have health and are equal parts melee and range. Most of the ones who do have protection have high armor and barriers. Your abilities selection should focus on powers conducive to fire and biotic explosions: Warp and its ilk should shine here.

The monastery is also highly spacious and you'll likely be fighting enemies from a distance. If you want to practice your long-range skills, bring the appropriate weapons.

On approach to the planet, Liara will reveal, either in person if she's present or through a videoscreen if not, that she has just found out that the distress signal originated from an Ardat-Yakshi monastery, which is one reason the asari government was hesitant to give them any details at first. You can ask questions about the Ardat-Yakshi and respond how you will, then you will land at the monastery. If Samara survived Mass Effect 2, there will be a vehicle you can examine directly to your right, with one of your squadmates stating that someone recently arrived here. Pick up the Assault Rifle Stability Damper to the left of the door, then proceed.

Screams in the Dark 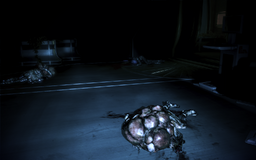 The elevator is missing, so you will have to jump across the gap and then slide down into the elevator shaft using the ladder on the right side of the platform. A squad member will comment on the noises you can hear as you reach the end of this platform and leap across the gap into a disheveled room.

Explore the room to find a Pistol Melee Stunner and a Glyph upgrade ("Gallae's Electronic Signature") on the far left, a console with an advisory notice from Matriarch Gallae, a PDA on a table, a Sniper Rifle Spare Thermal Clip and wall-safe (+7500 credits) in a chamber to the right of the entrance door along with a console about daily Ardat-Yakshi life at the monastery, and, where you can't miss it, an asari corpse. A cutscene will play upon examination of the corpse wherein you discover that there is a bomb in the Great Hall of the monastery. Respond how you will, then you will find yourself facing into an open doorway.

Pick up the thermal clip if you need it and go through the door. There is nothing else of interest in this room, so bypass the door and go on to the next room. In this room you will meet Samara, provided she's alive. After the cutscene, turn right to find a PDA beside another corpse. Pick it up to garner 20 experience and the mission Citadel: Asari Widow.

Head out the door to the left, where a squad member will comment on the unlikelihood of this being a Reaper target. There is nothing of interest, so proceed down the stairs into the courtyard. You are safe for the moment and have time to find a few thermal clips, if you need them, but as you approach the other side of the space, a Banshee will appear for what is likely to be the first time in your game. See its article for full information and tactics on dealing with the creature; the brief summary is stay as far away as possible and shoot it in the head.

After you have taken down the Banshee, several Cannibals will spawn. There is nothing but ammo to pick up, so refill your ammo and move on. On the other side of the door, a cutscene will play showing an Ardat-Yakshi, Falere, fighting a Cannibal. Either Shepard or Samara will defeat it, leading to a conversation about the Reapers trying to turn all Ardat-Yakshi into Banshees. Falere will ask you to save her sister, Rila, from the Great Hall. Respond however you wish, but no matter which option you choose, Falere will learn about the bomb and rush on ahead of you to save her sister by herself. Samara, if present, will go after her.

You can examine the broken elevator on the left side of the room, and there is a computer down the right side to the left of the door that can be examined for 20 experience and to learn that the leadership of the monastery considered the Reaper threat to be a rumor that they needed to protect the students from hearing. Proceed through the door to find several Cannibals and a Marauder. They will not notice you when the door opens, so you have time to coordinate an attack to take out at least one Cannibal before the fight actually starts. As soon as you attack, move into cover to deal with the rest of them.

There is a Disciple shotgun and a Serrice Council shoulder guard through the first doorway on your right, and there is a medical station at the far end of the same room. Go to the room on the other side of the walkway to access two computers, a wall safe with 5000 credits, and a weapon bench.

The computers contain letters that reveal that one of the Ardat-Yakshi, Yanis, has been causing trouble at the monastery. If you kept Morinth alive in Mass Effect 2, one of the computers will instead contain a report from Superintendent Jethra to Matriarch Gallae discussing Morinth's attempts to contact her sisters, and expressing her concerns about security at the monastery. 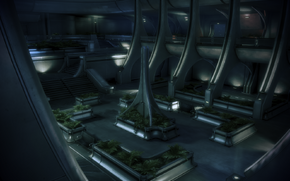 You can then go down the stairs, where you will encounter another Banshee and several Cannibals. This fight is significantly more difficult than the first fight with a Banshee, because there are not a lot of options for cover until you take out some of the Cannibals, and the Banshee has a habit of following Shepard around. The engagement can be less hazardous if squadmates are told to hold position at the top of the stairs and Shepard retreats to join them when the enemies appear. Once it's dealt with, though, the grand staircase is a great place to defend from.

After you have defeated the enemies, refill your ammo and bypass the door. In the next room you will find an Assault Rifle Precision Scope up the stairs to the left and an asari corpse in the middle of the room next to some crates. Examining the corpse will result in a discussion amongst your squadmates about the unnecessary death at the monastery thanks to Asari High Command's decision not to evacuate when they first heard about the Reaper threat. Activate the elevator to reach the Great Hall.

Medical stations can be found on the left and right sides just as you exit the elevator. There is also a Med Kit lying on the floor, in the center of the room just before the stairs leading up to the bomb. The bomb is on the far side of the room. There, Falere begs Rila to wake up, while Samara stands guard if she is present.

Activating the bomb will initiate a cutscene where Rila will finally wake up, but unfortunately she will attack Falere, because the Reapers have begun to indoctrinate her. After Falere/Samara knocks her unconscious, Shepard will start to look for a detonator for the bomb, but before they can, two Banshees and four Husks will attack.

Your best bet is to take out all of the Husks before the Banshees start teleporting across the room by using powers or weapons that have a large area of effect (e.g. the Venom Shotgun or Singularity); triggering a Power Combo or letting fly with grenades is also very effective. Then, try and get your squad members to draw the attention of the Banshees long enough for you to take them out. Stay away from the monstrosities at all times, running to the other end of the room whenever they get even a little close. Make free use of medi-gel to keep your squadmates active when they fall and to keep your own health up if you get hit by the Banshee's ranged warp-like attacks. Using multiple powers is a good way to get Banshees to stop teleporting, at which point you should shoot at their heads. Again: don't let a Banshee get close if you don't want to suffer a painful death. In the Wii U Version, an M-597 Ladon can be found here.

After the fight, examine the bomb again to initiate another cutscene. Rila will find the detonator and insist that her family leave with Shepard while she stays behind and sets off the bomb. Falere will fight, but Shepard will drag her to the elevator. Rila will then be attacked by three Banshees, which she is unable to hold off. One will pick her up and stab her with its claws, presumably to complete the indoctrination process, but in a last show of strength, Rila will declare that the Ardat-Yakshi are not the Reapers' slaves and will press the button on the detonator. Shepard and Falere, who is pounding on the elevator doors when the explosion goes off, will make it outside, where you can respond to her anger and grief in the way you see fit.

If Samara is present, at this point she will note that the Justicar Code requires her to slay any Ardat-Yakshi living outside the monastery. To prevent this, she will commit suicide. Fortunately, she can be stopped with a Paragon interrupt. Falere declares she will stay in the monastery, and Samara joins the war effort. If Samara is not present or if she committed suicide, you will be given the decision to either let Falere stay on the planet where she promises that she will not be alive if the Reapers come again, or kill her to guarantee that fact yourself.

“Tolae, you won't believe what Yanis managed to smuggle in: a copy of Vaenia! Meet us after supper in the library. Bring some study work. Rila's floor warden tonight, so act natural. We'll be by the east video banks. This is going to be so great. See you there! Oh, and delete this once you listen to it. Not like last time!”

“Jethra? This is Gallae. I've blocked extranet access. We don't need the students panicking about these Reaper rumors. Still, it will not hurt to tally our supplies. Please bring me an inventory before evening prayer. I'll contact Thessia later tonight to inquire what set the asari to war. Go in peace.”

You will receive a note from Captain Coreen Lemaes of the asari commandos:

This mission produces the following results: