Mass Effect: Paragon Lost
Kamille is a member of Delta Squad, a special forces unit of the Alliance deployed to Fehl Prime in 2185. She is a sincere and obedient soldier and her training speaks for itself on the battlefield. She is in a relationship with Mason and constantly snubs Essex for his persistent amorous advances towards her.

Kamille arrives at Fehl Prime with the rest of her squad in 2183 when the colony is under attack from Blood Pack mercenaries. Kamille's unit is shot down by the invaders while making a strafing run from the Kodiak drop shuttle. The survivors are rallied by Lieutenant James Vega, who assumes command after the CO Captain Toni is incapacitated.

During the Alliance counterattack, Essex and Kamille flank the enemy and devastate the enemy ranks. Kamille goes in firing heavy while Essex supports her with biotic strikes. The deadly duo are placed under risk when Essex gets a little too jumpy and biotically throws a varren sneaking up on him onto her, by accident. Kamille recovers but Essex is taken down by Brood when he tries to help her.

Vega eventually disables Brood and Kamille punches Essex in the gut to show her feelings towards him at that moment. She thanks Vega and speaks for the squad, saying they all owe the victory to him.

Two years later, Fehl Prime has recovered and the Alliance has bolstered the colony's defenses with a heavy anti-ship cannon and military-grade kinetic barriers. Kamille works meticulously for her part and is now openly in a relationship with Mason, much to Essex's chagrin. She never gets tired of putting Essex in his place whenever he tries to make a pass at her.

Captain Toni orders the Delta Squad to investigate a strange jamming signal originating from the colony's outskirts. James orders Kamille and Essex to head south and flank the signal point. At the signal's location the squad discovers an unknown alien device as its cause; Vega decides it is safest to destroy it and Essex does so with his biotics, despite Treeya's wishes. Later, while Treeya tries to salvage useful data from the remains of the artifacts, the colony comes under attack from the Collectors, who are responsible for a spate of colony disappearances in the Terminus Systems. 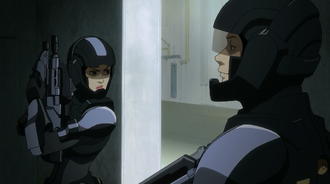 With Captain Toni unavailable, Vega once again assumes command. Lacking data on the situation, he suggests going in stealth for recon, staying beneath the enemy's sight lines. When Milque suggests having "someone" guard the Mako in case they needed a getaway, Kamille dryly comments that maybe "someone" needs to grow a pair.

While on reconnaissance, Kamille wonders where the rest of the colonists are, having seen no one but alien hostiles since their arrival back on the colony. She gets her answer soon enough as the squad encounters the colonists on the ground - paralyzed from the seeker swarms.

Shifting to the offensive after seeing what the Collectors have been doing, Vega leads the squad along with Treeya and Messner to the anti-ship cannon to use it to destroy the Collector ship, with Essex and Kamille standing guard at the cannon facility's entrance and Mason and Milque providing distraction and sniper backup, respectively. However, the cannon is unable to penetrate the ship's kinetic barriers, being fired only at half power. The Collector ship destroys the cannon and Collector troops start attacking the squad.

Kamille and Essex cover the rest of the group's retreat as they make their way to the underground labs. They get on a tram and provide covering fire at its roof. When Vega and Treeya narrowly escape the destruction of the tower, Kamille and Essex catch them. They manage to hold off the Collector troopers until the seeker swarms arrive. Essex is distracted by the Swarms for a moment and Kamille, out of thermal clips, gets flown away held on the legs of a single Collector. 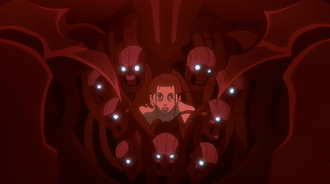 Kamille is processed into a Praetorian and her head could be seen by the others when the creature attacks the labs. Among the other heads in the Praetorian's mouth, hers was the only one that still appeared to be human, with her upper torso mostly fully intact. Mason, seeing only Kamille, impulsively approaches the abomination, which incinerates him with its particle weapon.

The Praetorian, being persistent in its attack, hounds the remnants of the team and manages to stab Nicky in the gut. Vega promptly leaps on the monster's back and unleashes lots of rounds on it in revenge, and with Essex's help manages to jump off to safety before crashing with the monstrosity below. The Praetorian, along with any vestiges of Kamille, disintegrates in the industrial vat it fell in.

Retrieved from "https://masseffect.fandom.com/wiki/Kamille?oldid=512835"
Community content is available under CC-BY-SA unless otherwise noted.