A human-controlled private company, Kassa Fabrication is known to make some of the finest body armor in the galaxy (Colossus Armor). When it comes to personal protection suits, no expense is spared - as reflected in the exorbitant cost of their products. Kassa also makes top quality weapons such as the advanced Harpoon Sniper Rifle. Recently, Kassa has also begun to manufacture omni-tools, though it will be some time until the quality is brought up to the high standards of their armor lines.

The Kassa Fabrications Model 12 Locust is a compact submachine gun developed for the Alliance but now favored by gang enforcers and hitmen. Featuring a complex recoil-reducing mechanism and high-grade autotargeting software, the Locust delivers longer-range, more accurate fire than others in its class. 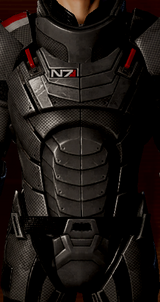 The Polaris Omni-tool can only be acquired in the game itself, not through console commands.

Retrieved from "https://masseffect.fandom.com/wiki/Kassa_Fabrication?oldid=471553"
Community content is available under CC-BY-SA unless otherwise noted.