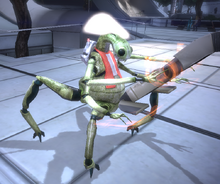 The keepers are a bio-engineered, insectoid race found only on the Citadel. They are completely docile and harmless, and appear to exist for no other reason than to maintain the Citadel and its systems.

The keepers are believed to have been created by the Protheans to serve as caretakers of the station, and have become essential to the Citadel's operation. Very little is known about them, as they do not communicate with other species, and it is against C-Sec regulations to interfere with keeper activity. 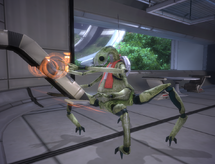 Physically, the keepers resemble large aphids. Little else is known about their biology, other than what can be observed with the naked eye. Attempts to capture a keeper or take it into custody for study will cause the creature to undergo a sudden "self-destruct," with a form of acid being released internally. The affected keeper literally melts into a puddle of proteins and minerals in less than a minute, preventing any serious research.

Due to the fact the keepers persist in destroying themselves when interfered with, they are nearly impossible to scan or study. By Council law, it has become illegal to interfere with the keepers on penalty of imprisonment, because the Citadel cannot be maintained without them. No matter how many keepers die due to old age, violence, or accident, they maintain a constant number. No one has discovered the source of new keepers, but some hypothesize they are genetic constructs: biological androids created somewhere deep in the inaccessible core of the Citadel itself.

Keepers are mute, at least to the perceptions of other races. Some Citadel scientists believe the keepers communicate between themselves with telepathic images, but this is mainly scientific speculation. Their inorganic components (specifically, the component on the keeper's back and its attached antenna) are speculated to facilitate the coordination between the keepers and the Citadel. 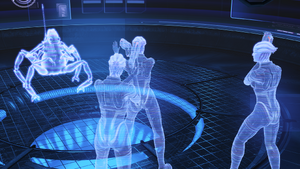 The asari first encountered the keepers when they discovered the Citadel in 580 BCE. When the first asari came aboard, the keepers were already there, and quickly did everything in their power to assist the asari in settling onto the station. This behaviour was compared to servants surprised by a master's sudden return and scrambling to make everything ready. Ever since, the keepers have gone about the business of maintaining the Citadel in silence as they have for centuries, apparently ever since the Protheans left.

Two scientists, Chorban and Jahleed, became interested in the keepers and created a scanner to analyze them. Though their findings were very preliminary, they theorized that the keepers were as old as the Citadel itself. 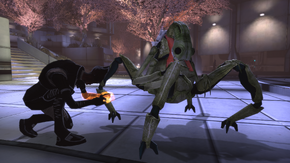 It is later revealed that the keepers, along with the Citadel, predate the Protheans; they are, in fact, the key to the Reaper genocide, which occurs when a civilization is judged to be sufficiently advanced. According to Vigil, the keepers were likely once a race that was either created, conquered, or indoctrinated by the Reapers, possibly even the first race they enslaved. Whatever their origins, the main purpose of the keepers now is to maintain the Citadel in its attractive state so that sentient organic life will settle there, and support their habitation of the Citadel once they take possession of the station, as they have for countless other races throughout time.

However, once an organic species has settled on the Citadel and reached the required level of technological advancement, the Reapers' current vanguard, a single Reaper left behind to monitor the situation, sends a signal to the Citadel, which in turn signals the keepers, compelling them to activate the Citadel relay to dark space, and begin the process of genocide. The Protheans succeeded in altering the Citadel's signal so that the keepers ignored it, though too late to save the Protheans themselves from extinction at the hands of the Reapers. The keepers have changed and evolved so they only respond to the Citadel itself; they are now no longer under Reaper control and pose no threat to anyone.

Seeing as the keepers are now useless to the Reapers, Sovereign sought to replace them with a more controllable race, like the geth, believing synthetic races were more predictable and malleable to its wishes. 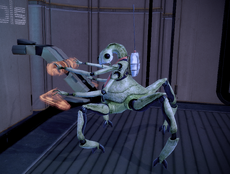 After Saren's attack on the Citadel, the keepers began repairing the station, even touching up the repair work carried out by the species inhabiting the station. Nobody knows from where the keepers get the materials for their repairs.

If Shepard aided Chorban in collecting data on the keepers, he will send a message to Shepard detailing his findings. Chorban has discovered that the keepers are engineered and are designed to react to something like a signal which occurs every 50,000 years or so. In a message to Shepard, he states his theory that "they were engineered millions of years ago... by the same people who made Sovereign!" 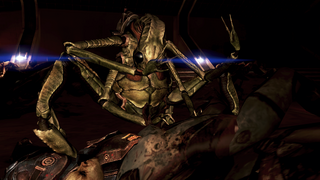 Keepers continue to perform their normal routines during most of the Reaper invasion in 2186.

Tunnels normally used by keepers are used as escape routes by Cerberus forces when they launched an abortive attack against the Citadel.

Near the end of the war, the Citadel is captured by Reaper forces and moved over Earth. The Reapers use parts of the Citadel as a dumping ground for human corpses, and the keepers assist in processing the bodies.

The keepers themselves reveal nothing of their nature and often undertake tasks that seem bizarre to other races, like rearranging offices or even changing architecture down on the Wards, with no explanation. In fact, all attempts to communicate with them have been in vain. They go about their work, seemingly oblivious to the hustle and bustle going on around them. Apart from curious scientists (and the occasional inconvenienced citizen who has had their office rearranged) most people on the Citadel stop noticing the keepers soon after they arrive.

In addition to their maintenance duties, the keepers are also known to run protein vats. These vats are capable of recycling biomass. What else the keepers do with them is unknown to the general public.