Kelly Chambers is Commander Shepard's yeoman on the Normandy SR-2 in 2185. In addition to her duties as yeoman, she is also a psychologist and will offer insight into each new addition to the squad. She is a potential romance partner for either a male or female Shepard.

Kelly's primary job on the Normandy is to keep Commander Shepard abreast of new e-mails and pass on meeting requests from Shepard's squad mates. In addition, Kelly provides counselor support and monitors the psychological state of Shepard and the crew, offering input on mission outcomes and impressions on Shepard's team. Her abilities as a counselor and her impressions are influenced by her education where Kelly graduated with a psychology degree. In the Cerberus organization, she is identified as a member of the Lazarus Cell.

If Shepard asks her about Cerberus' notorious reputation, Kelly refutes the notion that she or the organization is anti-alien. While she does believe in the importance of Cerberus' agenda to benefit humankind, Kelly doesn't believe that it means they hate other species by default. Throughout her time on the Normandy SR-2, Kelly regards aliens with the same respect and compassion she feels for her fellow mankind, evidenced by her repeated displays of concern over Shepard's non-human companions.

She is initially identified and titled as "Yeoman Chambers", but if Shepard responds positively at her suggestion to call her "Kelly", she will be identified as such. Alternatively, as Shepard interacts more with her, she will be addressed as "Kelly Chambers" and will eventually be referred to as "Kelly", possibly to show a growing camaraderie between Shepard and the crewmates.

Provided Shepard isn't rude to Kelly from the outset, the Commander may invite her to a private dinner in the Captain's Cabin. Kelly is exhausted in the morning after, remarking she hasn't stayed up that late since college days. Shepard's fish collection caught her eye during the meal, so the next time the Commander talks to her she offers to feed the fish while they are away.

Known members of Kelly's family include a sister who liked cats but also opened a dog shelter. 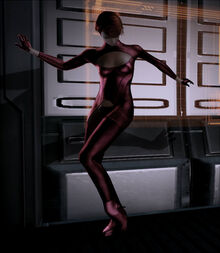 Kelly is a potential romance option for both male and female Shepard, though romancing her doesn't affect any relationship Shepard might have, whether it is with their current squad member or love interest in 2183.

Shepard can flirt with Kelly anytime prior to the suicide mission. She trusts the Commander to catch her if she falls, and finds it an enticing thought if Shepard wants to embrace her while doing so.

If Kelly is among the crewmates saved from the Collector's base, and if Shepard currently has no existing romance partners, she will send a message on the terminal telling Shepard to use the intercom to invite her up into Captain's Cabin. This happens immediately after the suicide mission is finished and Shepard survives. Shepard will receive a discreet message on their private terminal from Yeoman Kelly, saying she would like to meet the Commander privately and will wear something that is not exactly the recommended ship's uniform. Shepard can go to the Captain's Cabin and call Kelly through the intercom.

When Kelly is invited to Shepard's cabin, she will be sitting on the couch wearing an outfit similar to the ones worn by the dancers in Chora's Den and Afterlife. Kelly performs a series of dances, sits on Shepard's lap while the two caress each other, and finally they lie down together in bed, holding each other close with Shepard stroking Kelly's arm. Notably, among all the romance options, Kelly is the only person who will dance for Shepard. 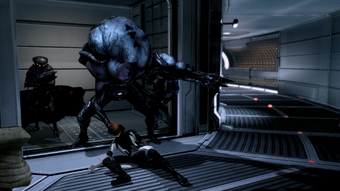 After the Normandy crew is abducted by the Collectors, Shepard must decide whether to travel immediately through the Omega 4 Relay to rescue the crew and destroy the Collector Base or to delay the mission in order to prepare themselves better.

If Shepard chooses the latter option, the team arrives just in time to see Kelly and other crew members get horrifically dissolved into raw organic material — which Doctor Chakwas describes as paste — used to create the Human-Reaper. If Shepard chooses to go through the Omega 4 Relay immediately, then Lilith, a colonist from Horizon, is liquefied, but Shepard and the squad free Kelly and the rest of the crew just in time. After releasing them from their pods, Shepard can choose to assign a squad member to lead the survivors back to the Normandy.

If Shepard saves Kelly in the suicide mission, the yeoman recalls the events of her imprisonment vividly, reminiscent of Thane's memory recollection.

“If there was ever a reason I studied psychology, it was to help people at a time like this.” 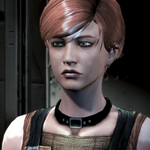 If Shepard and Kelly held that private dinner and she survived her encounter with the Collectors, months later she can be found at the back of Cargo Hold B in the Citadel's refugees camp.

Kelly is enthusiastic to see Shepard again after worrying about the Commander since the Reapers' invasion. She reveals her desertion from Cerberus, having observed their methods that go against her conscience. She politely declines Shepard's invitation to return to the Normandy due to the recurring nightmares of her abduction by the Collectors, preferring to stay on the Citadel to help the refugees instead.

When Shepard meets up with her again, Kelly apologizes while confessing to sending reports on Shepard and the crew to the Illusive Man during her time as the Normandy's yeoman. If Shepard reprimands her for this, she cries and later ingests a cyanide pill from her days as a Cerberus agent out of depression stemming from her traumatic experience being abducted by the Collectors. Otherwise, Shepard reassures her and tells her not to worry about it. If Kelly took care of Shepard's fish during her time on the Normandy, she will return them to the Commander.

After the attack on the Citadel by Cerberus, if she was not told to change her identity, Kelly is nowhere to be found. Shepard finds out that she was killed by Cerberus by overhearing refugees talking near Kelly's previous location or the chatter between Donnelly and Daniels in the Normandy's Engineering deck (if they also survived the Collectors' abduction and were offered pardons).

On the other hand, if Shepard insists that she change her identity, she dyes her hair blonde and changes her name to "Felicia Hannigan", allowing her to survive the Cerberus attack. She thanks Shepard and reveals how close Cerberus came to lining her up with the others and shooting her. After this meeting with Kelly, she sends Shepard an e-mail revealing that she met up with her former colleagues who also changed their identities. 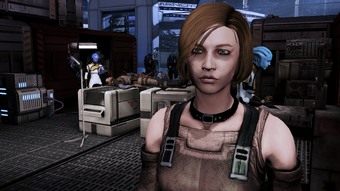 Later on, during the assault on Cronos Station, Shepard may access recordings from 2185 between the Illusive Man and Miranda Lawson stating that Chambers, amongst the other members of the Lazarus Cell, were handpicked carefully. Due to her personality, her presence aboard the Normandy would portray Cerberus in a much more sympathetic light.

Even if Kelly dies as a result of one of the above situations, her name does not appear on the Normandy's memorial wall; it only appears if her death occured during the suicide mission.

Despite their relationship, platonic or otherwise, Kelly is not among those Shepard can say farewell to during the Battle for Earth. Similarly, Kelly is not involved during Shepard's identity theft crisis or even in the aftermath situations stemming from it.

“Times like these are when you need a love to fight for, someone to confide in. You know... a partner.” 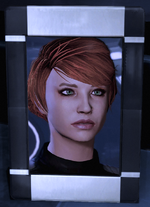 If Shepard invited Kelly to the Captain's Cabin in 2185, the Commander may pursue her if they aren't involved in a romantic relationship with anyone else. Also, Kelly must have her identity changed to avoid being killed by Cerberus.

In one of Shepard's visits after the Cerberus attack on the Citadel, Kelly curiously asks if Shepard has anyone special to which the Commander can say that Kelly is the one. She expresses the same feeling, albeit a little concerned of their obligations. With a little coaxing, Kelly leads Shepard into a container. When they reappear moments later, she gives Shepard a picture of her from the time of their first meeting. The picture then appears in the Normandy's Captain's Cabin.

In subsequent visits, Kelly reminisces the times she was invited to Shepard's cabin, regretting no longer having the dancer's outfit and wishing the war was over so that they can finally be together.