Kenneth Donnelly is a former Alliance engineer. He is a Cerberus operative in the Lazarus Cell and an engineer aboard the Normandy SR-2 in 2185.

Engineer Donnelly works in the engine room with his best friend Gabriella Daniels. They graduated from the same class at a tech academy and served aboard the SSV Perugia at the Battle of the Citadel. After the battle, when the Alliance discredited the existence of the Reapers, Kenneth openly voiced his defense for Commander Shepard, bordering on insubordination, though he wasn't court-martialled because of his engineering talents. This got him noticed by the Illusive Man. Gabby insisted to Kenneth that she be included in the Cerberus contract as she felt he would fall apart without her.

Unlike most Cerberus operatives on-board the Normandy, both Kenneth and his friend Gabriella seem vastly ignorant of the "terrorist" operations that the organization engages in. If Shepard asks about why Kenneth joined Cerberus, he replies that he joined to "kick the Collectors right in the daddy-bags."

If asked, Kenneth and Gabriella tell Shepard about their maintenance problems with the FBA arrays. Kenneth begins on a detailed technical description of the problem, till Gabby cuts him short and explains to the Commander that they need FBA couplings. If Shepard purchases the couplings from Nashan Stellar Dynamics, Kenneth invites them to a game of Skyllian-five poker. The Commander can choose to join in, simply decline the invite or downright forbid gambling.

Kenneth frequently chats with Gabby about new ship upgrades and the crew. He also makes a lot of comments about other women aboard the Normandy, which leads to teasing and scolding from Gabby. Kenneth makes remarks about the snugness of Tali'Zorah vas Neema's suit "in all the right places", about Jack's simultaneous sexiness and viciousness, and about Miranda's uniform making him stand "at attention."

Kenneth is among the Normandy crew members abducted by the Collectors when they invade the Normandy, and he will die if Shepard and the squad take too long to rescue the crew. 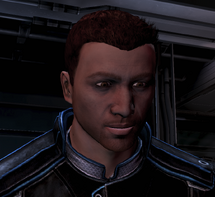 Provided he survived being abducted by the Collectors, Kenneth was taken into custody when the Alliance impounded the Normandy. Shepard can give him clearance to return to work in the Normandy's engine room using their Spectre status.

Chief Engineer Adams describes Kenneth as a very talented and dedicated person, but expresses reservations about his lack of respect for the chain of command. Adams is glad to have him on the team nonetheless.

Kenneth and Gabriella Daniels – if she survived – get to work on the engineering deck, resuming their old activities on the Alliance Normandy SR-2. They frequently chat about their present and past adventures: Kenneth resumes his crude comments about other women, and Gabby occasionally berates him.

When EDI gets a physical body, Kenneth marvels at its engineering: in addition to state-of-the-art hardware, Kenneth makes special mention of the body's "padding", and wishes he were a wall EDI can accidentally bump into. Sometime later, when EDI has been battle-tested on the squad, Kenneth inquires Gabby if there were any "oils", "lubricants", and "moaning" involved during repairs, admitting his imagination isn't that good for such things.

Asari are not exempt from his remarks: using Matriarch Benezia and Samara for comparison, he wonders if asari get more "ample" with age, and muses about spending his sunset days in an asari retirement home. He also asks Gabby for opinions about Samantha Traynor, erroneously referring to her as "yeoman", and is undeterred to learn about her orientation: he wants Gabby to "talk" to her instead and to "take video" if it works out.

Gabby alerts him to the Normandy's new poker table in the lounge, and the first thing Kenneth suggests is to invite Liara and Traynor for a game of strip poker. Gabby asks why not include another woman in the game, and Kenneth's reason varies. If Ashley Williams is around, he prefers not to include her out of intimidation. If Diana Allers is around, he says she'll just bring cameras and record everything. If neither are around, he says that in a game of strip poker, EDI has already lost.

Not everything that comes out of Kenneth's mouth is crude, however. He takes the time to deride the Illusive Man's preference for American bourbon, noting that it cannot compare to the peat aroma of a fine Islay scotch. If Shepard obtained a robotic dog and left it roaming the ship, Kenneth wonders about its usefulness. If Tali is around and is tinkering with the Normandy's heat diffusion systems, he protests the unorthodox jury-rigging, claiming that the Normandy's systems are precision engineering.

Adams and Donnelly debate on whether EDI pilots the Normandy or is the Normandy, and Kenneth takes the stand EDI is just a passenger on the ship. Kenneth believes that the ship was spaceworthy even before EDI was installed, and argues that unlike EDI, organics' minds cannot exist without bodies. Shepard can catch the engineers going back and forth, with EDI deciding over speaker that both have valid points. If Shepard supports Adams' position, Kenneth makes an offhand comment about liking EDI's curves on her humanoid body more than the Normandy's hull, though whatever position Shepard supports, Kenneth claims his head's going to explode from all the philosophizing.

If Shepard decides to humor Adams' request for a GX12 thermal pipe, Kenneth attempts to explain in technical terms the reasons for buying one, but gets cut off by Gabby anyway, who simplifies what he said into a safety issue. Vented plasma from the Normandy's core would vaporize everyone in the room, Kenneth says, and reminds everyone that someone died on the suicide mission because of it if the Normandy's kinetic barriers weren't upgraded. Later, if Shepard buys the component, Kenneth is "volunteered" to crawl through the ducts to install the device, the reasoning being that he's the power control engineer. He muses that he is currently "inside" EDI, earning another rebuke from Gabby. After the installation, Kenneth helps Gabby make some theoretical improvements to the Normandy's eezo capacitors, though since the tech is inapplicable to the Normandy itself, the project bore fruit as optimized eezo capacitors for the Crucible.

Kenneth is averse to discussing anything to do with the crew's abduction by the Collectors back in 2185, flat-out saying no to Gabby when asked if he ever thinks about it. If Kelly Chambers died recently, though, word of it reaches his ears, and if she committed suicide, Kenneth speculates that their experience with the Collectors had something to do with it. If Kelly was shot by Cerberus during the Citadel coup, however, Kenneth muses what could've happened if they went back to Cerberus and praises Gabby's intuition for saving them from a worse fate. 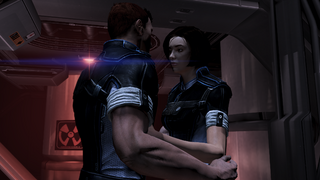 Kenneth's perverted attitude eventually comes to a head one day. Gabby accuses Kenneth of commenting on other women but never once appreciating her. Kenneth is reluctant to start a relationship, believing it would impact the mission. If Shepard sides with Gabby during the argument, Kenneth grows to see the Commander's point that they're fighting the war not for themselves, but for the people close to them, and starts complimenting Gabby's legs. Kenneth and Gabby can be "caught" in the sub-deck later, "double-checking the thermal ducts." If Shepard does not bother to "catch" them, the two will remain there indefinitely, even commenting on Tali's jury-rigging of the venting from their location in the sub-deck.

Just before the final battle on Earth, Kenneth bids the Commander good luck, wishing he could have joined at their side. Gabby mocks his shooting abilities, and Kenneth modifies his statement into wishing he could shoot better, then join Shepard.

After the war, If Shepard used the Crucible and had sufficiently prepared for the fight, Kenneth, Gabby, and Major Coats preside over reconstruction efforts on a devastated London.

If Gabriella died during the Collector attacks, but Kenneth survived, he can still be recruited. However, he is still devastated by Gabby's death. He'll be more reserved and quiet, according to Engineer Adams, and will no longer engage in deck banter. Before the final battle on Earth, he'll bid Shepard to make the Reapers "feel it."