Edit
watch 02:24
Who are The Kett?
Do you like this video?
Play Sound 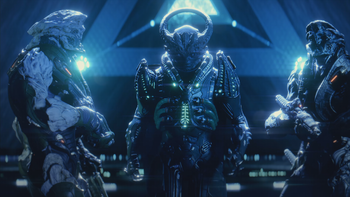 The kett are a hostile race encountered by Andromeda Initiative personnel in the Andromeda galaxy.

The kett are bipedal digitigrade humanoids with a skeleton containing 332 bones. Dense formations of bone also grow externally on their bodies, taking the form of armor-like extrusions on their arms, legs, torsos, and heads, and according to Dr. Lexi T'Perro these feel as strong as a krogan's frontal plate. These bone structures vary in shape, size, and location depending on the type of kett. Their eyes are pale white and receded. Kett blood is brownish-green.[1] 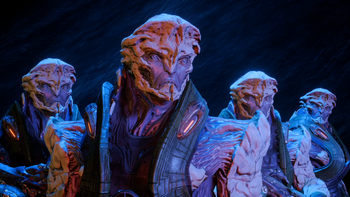 There are no visible distinctions between "male" and "female" kett of the same type. Kett have very low-pitched voices, and those who have marginally higher voices are generally considered female.

Kett possess no reproductive organs, and they reproduce only through an artificial process called exaltation. It is speculated that exaltation arose long ago in kett history when their genetics reached a point of stagnation, leaving the species unable to breed through natural means. The kett began adding beneficial genes from other species into their own genome in order to continually improve themselves, which they refer to as harmonization. Kett mastery over genetic manipulation enabled them to develop a serum to rapidly convert other species into obedient kett, which became the basis for exaltation. To build an army or replenish their numbers, kett simply capture members of other species and transform them through exaltation. Heleus Cluster species that have been subjected to exaltation include the challyrion, who become wraiths, and the angara, who become Chosen and Anointed.

Kett biology retains traits taken from many other species. One such trait is that kett can survive for limited periods in inhospitable environments without protective suits, including vacuum. However, nothing from the original species' body is left: a kett exalted from an angara, for example, only has traces of angaran genome remaining. Internal scans show kett organs, not angaran ones. They are physically kett, for all intents and purposes, and exaltation appears to be permanent and irreversible thus far.

Kett lifespan is currently undetermined, though it is known that the Archon of the Heleus contingent has been active in cluster affairs for over seven decades.

Following the arrival of the Andromeda Initiative, the kett become interested in exalting Milky Way species. They begin developing an exaltation serum for krogan, but the process is incomplete and the partially-exalted prototypes, called Behemoths, are mindlessly hostile to both non-kett and kett.

Exaltation unified the kett homeworld of Sarhesen, and in time the other worlds that the kett empire conquered.[2]

The kett are not native to the Heleus Cluster, which they call Sector 1-19-NYKZ, and began invading it in 2744. When the angara encountered them, the kett lured them into a false sense of security with gifts and offers of friendship, before kidnapping their leadership and providing information which provoked arguments between angaran worlds. The uncoordinated and separated angara were swiftly defeated, though the kett would continue to have to deal with various resistance movements and later the unified Angaran Resistance led by Evfra de Tershaav.

The Archon assigned to the Heleus Cluster eventually began deviating from kett protocols. He blocked all research on angaran genetics from being sent to his superiors, using it to empower only the troops in his command, and took an obsessive interest in Remnant technology. This led to a schism between the Archon and Primus, his second-in-command.

The schism further escalated to the point where Primus contacted the current human Pathfinder in an attempt to bring down the Archon, although it is implied that Primus' deal with the Pathfinder is a ruse. Jaal Ama Darav personally voices his disagreement if brought along.

The kett have been shown to be highly militaristic, and look down on other species, considering them lesser beings. This can be seen from the fact that they experiment on prisoners with genetic traits considered useful and kill prisoners with traits deemed useless and have enslaved angara who are subject to the same treatment. They do not refer to individuals of other races with gendered pronouns (i.e, defaulting to "it"), further devaluing them.

Kett are mostly known through titles related to their position in society. Their personal names as translated appear to consist of barely pronounceable strings of consonants with no vowels, like "Zgtt" or "Pqtk".

While exaltation imbues all assimilated individuals with hardwired loyalty to the kett cause, they still retain individual personalities that may conflict with one another. Factions exist even among the kett: the Archon, for example, seeks personal advancement and domination over his peers with the Remnant, in contrast to the more orthodox view of merely expediting the conquest of Heleus. "Dissidents" to whoever holds more influence in any given region are routinely executed. 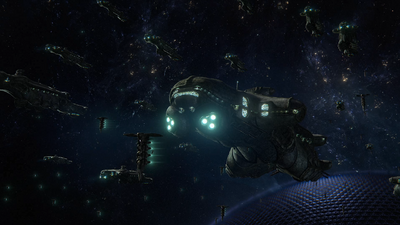 The kett possess technology that is comparable in advancement to the Andromeda Initiative, but have an unparalleled mastery of biotechnology and medical technology. Bio-engineered components are used in all of their machines and devices. Instead of conventional research and development programs, kett prefer to improve their technology incrementally by taking features and designs from other species' technology. Soon after the Andromeda Initiative came into contact with the kett, the kett began weaving aspects of Initiative tech into their own.

Kett starships use FTL drives with a radically unique design. When traveling across smaller regions, such as a star cluster, these drives function almost identically to Milky Way drives, but over longer distances, they function like Alcubierre drives. This is similar to having an on-board Mass Relay, but compared to actual Mass Relays, kett drives are both slower and extremely inefficient. Traveling between clusters is still arduous enough that the kett rely on their own ark ships and stasis technology for such voyages.

The kett language is called Tonaizhet. Known Tonaizhet words are listed below.

The kett revere exaltation as a sacred ritual, believing that the species selected to undergo exaltation are ascending to greatness while helping the kett do the same. These subjugated species are initially called "Chosen", and may later advance to higher tiers with the kett hierarchy, such as "Anointed". The kett exaltation facility on Voeld is called a temple, and is considered holy ground.

The kett government is referred to as an empire with the main ruling body being referred to as the Senate, situated on the kett homeworld of Sarhesen. According to Dr. Medrow Aden's intelligence, their society may be an eugenocracy. There are apparently twenty-one ancestral lineages from 'pure' ancient kett that act as the heads of ancestral lineages who lead their society. Contingents of kett stationed in a star cluster are led by an Archon, also called a "campaign leader". These Archons have a high degree of autonomy but still ultimately answer to the Senate and are required to report on their progress every 15 cycles. The kett send forces across the galaxy to exalt new species and expand the empire.[2] While exaltation of other races is the goal of the kett, their empire is also comprised of at least a dozen vassal species including: the eealen, thusali, and sirinde. 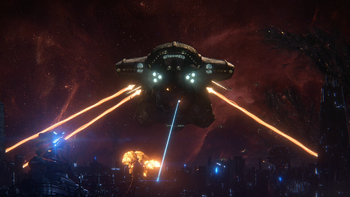