Khalisah Bint Sinan al-Jilani is a reporter for Westerlund News.

Al-Jilani appears at the C-Sec Academy on the Citadel, asking Commander Shepard for an interview. If Shepard agrees to the interview, al-Jilani's questions begin cordially, but gradually become more hostile. It soon becomes apparent that she is appealing to popular human opinion; she is critical of the Citadel Council, believing it treats humanity as a "poor relation".

Al-Jilani asks Shepard if the Normandy has effectively been handed over to the Citadel, if the Council has been asking Shepard to put the Citadel's requests above humanity's needs, and - if Shepard has just returned from Noveria - whether the Commander was specifically asked to sabotage Peak 15, which she describes as a human research station. She also asks about Feros if Shepard has just returned from there. Al-Jilani pushes for answers that 'prove' Shepard is a shill for the Council and becomes irritated if she does not receive them.

Shepard can answer al-Jilani's questions in several ways. The Commander can choose to answer diplomatically, which annoys al-Jilani; conversely, she agrees with several aggressive answers, but still usually manages to include a snide remark in her responses. Eventually, Shepard can either calmly dismiss al-Jilani, realise she has an agenda and walk away - much to her annoyance - or, if she has particularly angered Shepard, punch her. Although Admiral Hackett will later disagree, Shepard can impress al-Jilani by answering her questions in ways that emphasize human independence and strength, with Khalisah finishing the interview by saying, "Strong words. This is a good time for strong words."

When the Commander uses the Galaxy Map to travel to another system, Admiral Hackett contacts Shepard and describes what the response was on Earth to al-Jilani's interview. Later, a news report can be heard when travelling in a lift on the Citadel, remarking on Shepard's behaviour toward al-Jilani.

In 2184, al-Jilani compiles a number of reports antagonizing the Andromeda Initiative. Al-Jilani Investigates: Andromeda… Exposed! claims to have information on purportedly shady shenanigans the Initiative is involved with and insinuates sinister motives behind Alec Ryder's expulsion from the military and subsequent jump to the private sector. Al-Jilani considers the Initiative's goals an irrelevant vanity project, but when UNIN delegate Alis Silhaus promises a chance to smear the Initiative's backer Jien Garson, the journalist jumps on the matter needing no financial enticement.

To enhance her narrative, al-Jilani interviews Initiative agent Cora Harper on Tamayo Point, spinning the questions and responses to make it seem Cora has been subverted by too much alien influences. She insinuates that Cora's performance standards fares on par with asari children rather than commandos, that Cora has taken to eating, dressing and generally living like an asari, and on hearing Cora was recommended to the Initiative by her asari commanding officer attempts to underscore the Initiative's alleged corruption with the hiring of humans with questionable loyalties to humanity. Cora takes umbrage at this last bit and flares her biotics in anger, and with al-Jilani's camera drone capturing the moment the reporter hastily excuses herself out of harm's way.

Sensing another opportunity for her brand of reporting, al-Jilani acts on a tip-off from Cora's erstwhile asari friend Ygara Menoris. While Cora is in the middle of retrieving proprietary (and illegal) Initiative code from the Home Away space station, al-Jilani's interview about her prematurely airs from the Westerlund News extranet site. With Cora's face prominently featured on the piece, station security picks up on her unauthorized presence in the station although they are unsuccessful in stopping her from escaping.

Al-Jilani can be found in a far corner outside of the Dark Star Lounge on the Citadel in 2185. She again requests Shepard to conduct an interview, asking loaded questions, drawing irrelevant conclusions, and other logical fallacies about the Battle of the Citadel and the 2183 Council's fate, in order to show Shepard in a negative light regardless of their responses.

Shepard can interrupt her by punching her in the face, blackening her eye and causing other facial injuries. If the Commander is patient and listens to the questions, they can choose to charm the audience by painting the sacrificed people as heroes (if the Council was sacrificed, Shepard compares their background to humanity's past and note how the death of the Council allowed other species to excel). Alternatively, Shepard can reply that the audience and families of those who died deserve better than her. Shepard can also simply walk away from her, without responding. 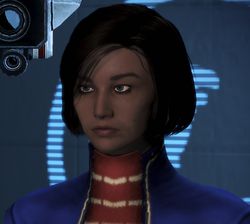 Believing an anti-human conspiracy is taking place in the middle of the Reaper war, al-Jilani attempts to obtain an interview with the Council in 2186, only to be stonewalled by Commander Bailey. She threatens to use her viewership to get what she wants, but Bailey's orders are orders. She storms out of his office claiming to camp out until she's granted an audience, to Bailey's indifference. Shepard, on their way to talk to Bailey, catches al-Jilani in the middle of her outburst outside the office.

Al-Jilani loiters near the Avina terminal at the Citadel Embassies. If Shepard talks to her, she criticizes the Commander for abandoning Earth while countless innocents die. Shepard can attempt to punch her, which she dodges.

Prior incidents with Shepard seem to have sharpened her reflexes a bit. If she was punched both times when the Commander met her previously, she declares "not this time you military thug!" The Commander can then headbutt al-Jilani and admonish her for yet another attempt at a slandering report as she slumps against the wall. She lies unconscious on the floor for the remainder of Shepard's current visit to the Citadel. Should the Commander not headbutt her, al-Jilani knocks Shepard to the floor with an uppercut.

If Shepard refrained from ever punching al-Jilani, the Commander can convince her that they are doing the right thing and ask for her assistance. Shepard tells her they need all the help they can get, persuading her to stay on the Citadel to keep asking the tough questions. She promises to do so.

Before walking away, al-Jilani reflects on her prior interactions with Shepard, either calling the Commander a violent thug or saying that the two of them have not always seen eye-to-eye depending if they punched her before or not. If Shepard never met her before, she says she hasn't always spoken kindly of the military. Whatever the case, she is glad Shepard is on humanity's side.

If Shepard elects not to goad or encourage al-Jilani, the Commander tells her to "get some help" and walk away from the interview.

During the Citadel coup attempt, al-Jilani uses a Westerlund News van to broadcast an alert requesting C-Sec reinforcements at the station's communication towers.

Shepard can listen to al-Jilani's unfinished interview with Admiral David Anderson for the Alliance News Network, which was recorded before the Reaper War began, inside Anderson's Personal Apartment. She asks Anderson about his experience training in the N7 program and his opinion on what qualities good leaders possess. Al-Jilani notes that the remainder of the interview, which was cut short due to the Reaper attack on Earth, would have focused on personal questions about Anderson's life. She dedicates her show to the soldiers fighting the Reaper invasion and concludes by expressing her hope that Anderson and all those under his command will survive the war.

Her name can be seen on the Armax Arsenal Arena scoreboard on the Silversun Strip, as well as among the high scores for Shattered Eezo at the Castle Arcade.

Retrieved from "https://masseffect.fandom.com/wiki/Khalisah_al-Jilani?oldid=529009"
Community content is available under CC-BY-SA unless otherwise noted.