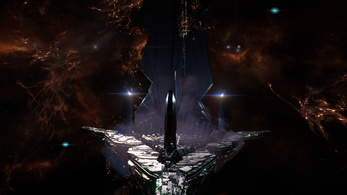 ANALYSIS:
An enormous Remnant space station, which the Archon believes is Meridian.

ALERT: There is a strong kett presence in the area, and scans have picked up multiple kett warships orbiting the construct. 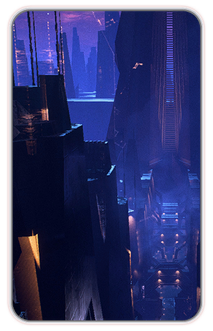 Roughly translated as "the place of ascension", Khi Tasira is a city-sized Remnant structure in the Civki system. From our investigations, we now know the Archon's research over decades led him to believe this structure was Meridian, control center for the Remnant vault network.

This may explain why Khi Tasira is one of the most heavily defended Remnant sites in Heleus. A substantial percentage of the kett fleet is anchored here, while APEX reports the Archon has sent dozens of kett cryptologists and physicists there is an attempt to solve its mysteries, with a battalion of Exalted to defend them. Approaching Khi Tasira, therefore, is to breach one of the greatest kett strongholds in the Heleus Cluster.

Even though Khi Tasira is not actually Meridian, but—as we now know—only a control module originally anchored into Meridian proper, the city remains a hugely significant Remnant site. It was home to a large population of the Remnant builders, the Jardaan, and still houses many of their experimental creations. The Remnant ships housed there appear to be in working order, as are most of the databanks and archives. Preserved despite the kett's efforts to ransack it for information, with study, the city could eventually present a glimpse into the Jardaan's motivations and a better understanding of the Remnant they left behind.

Retrieved from "https://masseffect.fandom.com/wiki/Khi_Tasira?oldid=513368"
Community content is available under CC-BY-SA unless otherwise noted.