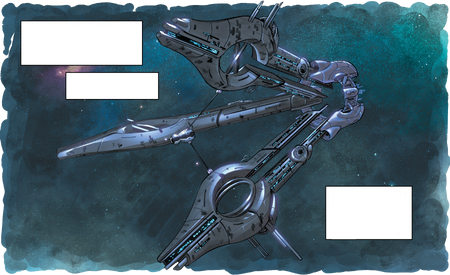 The Kholas Array is a gigantic geth structure composed of three primary mass relays joined together with "strange" technology. Using sensors in the combined relay corridor as a form of FTL "telescope", the array has the power to observe intergalactic distances in almost real time.

Considered a tall tale by the Migrant Fleet, the array was accidentally discovered somewhere on the fringes of the Perseus Veil by Shio'Leth vas Novarra during his Pilgrimage. The geth aboard it didn't seem interested in other galaxies; instead they appeared to be searching for something in dark space that Shio was unable to determine. For his part, Shio pointed the array at Andromeda in the hope of finding a new home for quarians there, downloaded the information recorded, evaded the hostile geth and shared it with the Andromeda Initiative.

A flaw in the initial observations forces Shio to return to Kholas with Tiran Kandros and correct his information. Agent Zeta, a salarian biotic who incorporated tech in his body similar to the array's, also journeys there after coercing the location from Shio in the hope of staving off his physical and mental degradation caused by his own biotic power. Despite facing heavy geth resistance Shio and Tiran get what they came for and escape. Agent Zeta succumbs to his own power and experiences a biotic meltdown, although the amount of damage, if any, inflicted on the structure is not readily apparent.

Retrieved from "https://masseffect.fandom.com/wiki/Kholas_Array?oldid=487725"
Community content is available under CC-BY-SA unless otherwise noted.