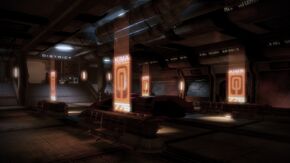 Kima District is a neighborhood in Omega. This district is notable as the location of the Archangel's base. Kima shares a border with Gozu District.

The Archangel's Base is a three level building. Access to the building is through either the mid-level by a bridge, or the lower level by tunnels. The mid-level has a main room and a kitchen, while the lower level, or basement, has a utility room and a garage. The three passages leading into the basement are equipped with emergency shutter controls.

The history of this facility before Archangel repurposed it is not known. Starting in mid-2185, the Archangel uses the facility as a headquarters for his band of vigilantes. A major advantage of this facility is that anyone approaching will have to cross a bridge, and if they are an enemy agent, that individual can be taken down by sniper fire. However, to the Archangel's chagrin, this proves to be a double-edge sword as he learns after his band is annihilated and he is forced to take shelter in the facility. If he attempts to leave by this means, Archangel will be killed.

Retrieved from "https://masseffect.fandom.com/wiki/Kima_District?oldid=511928"
Community content is available under CC-BY-SA unless otherwise noted.