Mass Effect Wiki
Register
Don't have an account?
Sign In
Advertisement
in: Locations, Planets, Planets With Satellites,
and 2 more
English

Klendagon is an arid terrestrial, slightly larger than Earth, but with a lower density that reflects its relative lack of heavier elements. The crust is composed of tin and aluminum, with wide deserts of dust-fine sand that are easily stirred by the wind.

Klendagon's most striking feature is, of course, the Great Rift valley that stretches across the southern hemisphere. What is most fascinating about the Rift is that it does not appear to be natural. The geological record suggests it is the result of a "glancing blow" by a mass accelerator round of unimaginable destructive power. This occurred some thirty-seven million years ago. 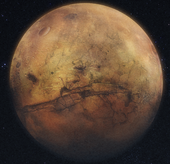 It is revealed by the Illusive Man that an Alliance Survey Team discovered that the Great Rift Valley was caused by a strike from a mass accelerator round. The original target of that round was the Derelict Reaper, which was hit and disabled 37 million years ago. No trace remains of the race that fired the round. However, he also indicates that both the weapon and the target have been located, mentioning in passing that the weapon was defunct.