Back to page
Edit

Kowloon Class vessels are basic freighter starships originally designed (and mostly used) by humans. Each ship is built on a standard design, likely for easy mass production. They generally carry a large cargo bay with smaller compartments for additional passenger haulage, but their design means these compartments can be swapped or exchanged to customize the ship. For example, the MSV Fedele exchanged passenger compartments for specialist biological research modules.

Kowloon-class ships are hardy but carry no armaments and only a standard engine core. Unfortunately this makes them easy prey for privateers or mercenary bands looking for a quick score. Most are given the prefix 'MSV', likely for 'merchant space vehicle'. 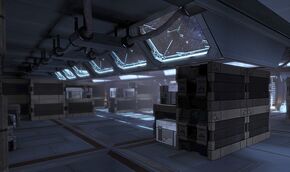